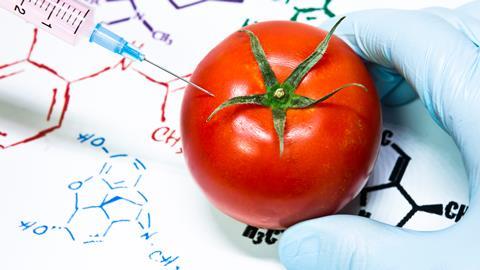 Is the UK moving too fast in introducing gene editing tech?

A new bill is designed to make GE innovation easier, but some campaign groups are concerned the government hasn’t considered all the cons

We are one step closer to seeing gene edited food on shelves, thanks to a post-Brexit bill introduced to parliament last month to “cut red tape” formerly set by the EU.

The bill will “enable the development and marketing of precision bred plants and animals which will drive economic growth and attract investment into agri-food research and innovation”, says Defra.

According to Defra and crop scientists, the move will boost food security. But not everyone is convinced. Campaigners – and some growers – are deeply concerned about the risks.

So, what is the difference between the two? What are the opportunities that supporters believe can be unlocked by gene editing? And what potential harms do critics foresee?

A key distinction between GE and GM, say scientists, is that gene edited crops could have come about through cross-breeding. The technology just allows the changes to happen in a fraction of the time, they say.

GE is carried out using a technique known as Crispr-Cas9, which harnesses a DNA sequence found in the genomes of organisms such as bacteria. The sequence detaches and destroys DNA from similar organisms in the case of infection. It can be used to make highly precise, small deletions in a targeted gene, says Professor Cathie Martin, lead author of a John Innes Centre study into gene edited tomatoes.

“The type of gene editing that has been considered in the new legislation is very specific,” she explains. “It is to do with making small changes that would be equivalent to mutations which could arise naturally.”

GM, on the other hand, involves inserting genes from other organisms – usually bacteria – into a crop’s genome, which results in the crop taking on new characteristics associated with the gene.

An important difference, says Martin, is “there is not any foreign DNA left in the genome” of gene-edited plants. This means “there is no question of there being unforeseen events”.

Environment secretary George Eustice has claimed the techniques will allow the UK to “speed up the breeding of plants that have natural resistance to diseases and better use of soil nutrients so we can have higher yields with fewer pesticides and fertilisers”.

It’s an important benefit for growers of crops like sugar beet, where pesticide use is a particular issue. Before the government reversed its ban on a neonicotinoid insecticide, around 80% of some farms’ crop yield was being wiped out by yellows disease, according to the NFU. Tom Clarke, member of the NFU sugar beet board, says 75% of sugar beet farms now use the neonicotinoids to help with growing.

Although not a “silver bullet”, GE could prove a helpful tool for growers in this situation, he says. He compares forgoing the benefits to having “a toolbox without a spanner”.

And sugar beet growers aren’t the only ones struggling with disease issues. Jack Ward, CEO of the British Growers Association, says: “We are getting to a point now where we are running out of chemical options… we are going to have to rely more heavily on disease-resistant crop variants” – the availability of which could be sped up by GE. These crops will allow farmers to invest in greener farming methods without sacrificing yield, he argues.

Nutrition is another added benefit, as highlighted in the John Innes Centre trial, which produced a tomato with higher levels of pro-vitamin D.

Martin says this technique could be used to increase vitamin D content in aubergines, peppers and potatoes, and vitamin C in wheat and rice.

For critics, though, these benefits do not outweigh the risks. Philip Morley, technical executive officer of the British Tomato Growers’ Association, says growers are exploring natural ways of boosting nutritional values that could potentially deliver far more health benefits.

But the crucial point of contention is whether GE is that different from GM. Critics point to a European Court of Justice ruling, which stated gene edited crops should be treated the same as genetically modified organisms. They fear the process could result in unintended alterations to plants and pose risks to the entire food system – especially as GE crops may not be labelled as such in the supermarkets.

Some fear these risks could soon be extended to animals. While the government says legislative changes won’t apply to animals until “a regulatory system is developed to safeguard welfare”, critics see it as an inevitable next step.

“If gene editing plants becomes normalised, people may be less challenging when it comes to considering and giving their consent for animals to be gene edited,” says RSPCA head of animals in science department, Dr Penny Hawkins.

For others, the key concern lies in the way the legislation has been put together.

Morley says a lack of consultation with the food sector has led to “a disconnect between the scientists and the growers, retailers and consumers”.

“It is a huge topic, and it will involve every crop, every livestock sector, every human being ultimately when we get into the realm of gene editing humans”.

Meanwhile, Alex Smith, MD of Alara Wholefoods, is concerned the bill only applies to England. He says it will “drive divergence not just with Northern Ireland but with Scotland and Wales as well”,  all of which are not planning on easing gene editing restrictions.

Smith is concerned this divergence will limit the UK’s exporting potential, as rules elsewhere remain less relaxed. “It is an inevitability this will happen, so finding the correct legislative framework for it to be launched is a necessity now,” he says.

“At the same time, pushing it through at the speed the government is going does seem pretty mad, because it is such a fundamental shift in the legislative parameters in the UK, Europe and rest of the world.”

So while GE may prove a way to boost crop yields and reduce reliance on pesticides and fertilisers – in England, at least – the controversy over its use will no doubt continue.

According to research by the Food Standards Agency last year, 42% of consumers had never heard of gene edited food products and an additional 21% had heard of it but knew nothing about it.

However, 39% said they thought that gene edited foods were safe to eat, compared with 30% who thought not.

Respondents who saw themselves as well informed about gene editing were more likely to think the food products safe to eat (61%).

Regardless, some 63% of respondents said they thought it was “very important” for gene edited food products to be labelled as such.

Following an information-based workshop run by the FSA, 82% of participants said they would be “very” or “fairly” willing to eat gene edited food, versus 33% beforehand.