Pig sector successfully reduces antibiotic use by another 28% 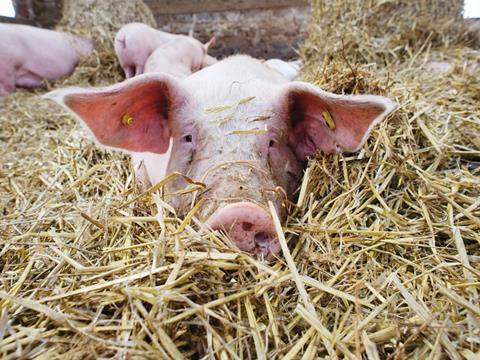 Antibiotic use in the UK pig sector fell by 28% in 2017, bringing the total reduction over the past two years to more than 50%.

Usage on pig farms fell from 183mg per population correction unit (PCU) to 131mg/PCU from 2016 to 2017, according to data from the pig industry’s electronic medicines book, which represents some 87% of pigs slaughtered in the UK.

Last year’s figures built on a 34% cut in antibiotic usage from 2015 to 2016, and put the sector on track to hit the 99mg/PCU target by 2020 set by the Responsible Use of Medicines in Agriculture coalition, said AHDB’s senior veterinary manager Mandy Nevel.

She welcomed the reduction in usage as a “great industry effort” with all parties fully engaged and determined to demonstrate responsible use of antibiotics in pigs.

“We must keep up the momentum to reduce use further in order to achieve our target of 99mg/PCU by 2020,” she added.

It follows an industry-wide push to tackle the threat of antibiotic resistance, which also saw the use of last resort antibiotic colistin fall by more than 70% from 2015 to 2016. The Red Tractor assurance scheme also tightened up rules on antibiotic use last February.

“The reduction in antibiotic usage achieved by the UK pig industry has been achieved by the sector working together and following a clear agreed plan of action,” said chief vet Christine Middlemiss.

“This was focused on responsible reductions alongside the prevention and management of disease,” she added. “This approach is essential for the sustainability of British agriculture and will help to maintain the effectiveness of antibiotics in the future.”

The pig sector had risen to the challenge, said National Pig Association senior adviser Georgina Crayford. “Nonetheless, the pig industry’s efforts will not stop here. There is further work to be done to reduce antibiotic use, such as improved collaboration between farmers to tackle endemic disease.”