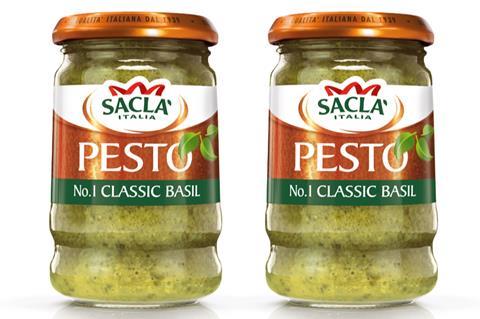 Following the Tweets, Saclà engaged two independent laboratories to carry out tests on the product in question

Fears Saclà pesto could contain undeclared peanuts were raised almost two weeks before the supplier issued a product recall, it has emerged.

In a tweet to Saclà on 8 December, a shopper said his wife, who has a peanut allergy, had reacted twice to its pesto. “Have you changed the recipe? No peanut warning but there is some,” he asked.

The brand asked him for more details, but on 21 December he tweeted again to ask if the complaint had led to a recall. “I’ve never had confirmation from yourselves which seems frankly disgraceful,” he said.

The Grocer understands Saclà contacted the customer immediately to request details of the product in question, including batch codes. Having received the information on 10 December, it engaged two independent laboratories to carry out tests.

Initial results, received on 17 and 18 December, showed no peanut contamination, it is understood, but a second batch of test results detected peanut traces.

”As soon as we received information from a customer relating to potential peanut contamination of one of our pesto products we immediately ordered urgent tests of our product lines to try to establish as soon as possible whether any contamination had taken place,” a Saclà spokesman said.

“Having received the results of these tests, some of which suggested that cashew nuts sourced from an external supplier may contain traces of peanuts, we immediately notified the Food Standards Agency and contacted all retailers, asking them to immediately withdraw all implicated pesto products from the shelves.”

In the recall on 20 December, Saclà pulled 19 branded and own-label pesto lines, stating it had discovered cashew nuts used in its recipes from an external supplier could have become contaminated with peanuts.

Following his initial tweet on 21 December, the shopper tweeted again to say he had spoken to Saclà and he believed the company was doing what it could to resolve the situation. “I feel assured they are trying to sort this. They’re open to suggestions for ideas.”

The recall has resulted in a nationwide pesto shortage, with most of Saclà’s SKUs still missing from shelves. The spokesman said the brand planned to have products back on shelves “within the next week or two” with “updated labelling making clear that our pesto may contain traces of peanuts”.

The crisis escalated further this week when Sainsbury’s recalled five of its own-label pestos.

Sainsbury’s pestos were not supplied by Saclà, but the retailer confirmed they shared the same raw ingredient supplier. “We hope to be fully stocked by the end of next week,” said a spokeswoman.