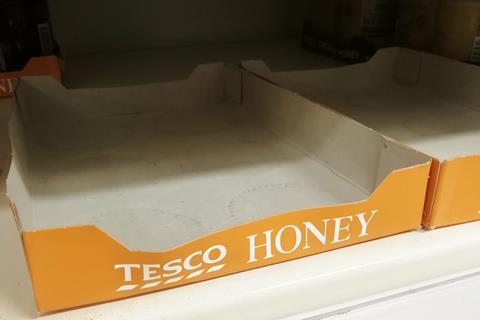 Tesco’s withdrawal of “fake” honey from shelves this week was unnecessary as the test used to determine its authenticity was unfit for purpose, food safety experts claim.

However, while NMR is widely recognised for food authenticity testing, scientists remain concerned that the test manufacturers’ databases do not yet contain a comprehensive list of honey fingerprints, leaving legitimate honeys vulnerable to inaccurate results.

“[The manufacturers] haven’t engaged with the honey industry to find out how different honey is produced,” said Adrian Charlton, principal scientist at Fera Science.

He believes Tesco’s honey sample tested positive for adulteration due to an unsatisfactory database rather than fraudulent activity. “[Fera] have tested Tesco honey and it is absolutely fine,” he added.

While NMR is frequently used for authenticating wine and orange juice, its success could not yet be translated to honey, agreed David Hoyland, technical director of the British Honey Association.

“Honey is much more complex. It has more variables, more sources, more importers and changes season to season,” he added. “The companies doing the testing do not have satisfactory databases to reflect this.”

“The robustness of the database behind the technique is in question”

The limitations of NMR testing for honey were discussed at a seminar hosted at Defra this month, where regulators discussed honey authentication with 62 of the leading honey producers, scientists, retailers and test manufacturers.

“The robustness of the database behind the technique is in question,” said Sterling Crew, chair of the Food Authenticity Network’s advisory board, who attended the meeting.

“[The test manufacturers] know the issues and said they’d open it up for greater transparency.”

The FSA has recognised the limitations of NMR testing on honey and advised it should only be a screening tool alongside “a weight of evidence”.

“No enforcement action should be taken in relation to NMR testing results alone,” it said in a statement. Neither the FSA nor Richmond Council could confirm the manufacturer of the test, or whether Tesco’s sample was subjected to additional tests.

However, Chris Elliott, professor of food safety at Queen’s University, Belfast, stressed NMR was “not a new method” and it would be wrong to “assume the tests are not correct”.

Tesco should “launch a full audit” if the manufacturer’s test was independently validated and certified, he added.

Tesco said: “Tesco brand honey is 100% pure, natural and can be directly traced back to the beekeeper. We carry out regular tests to ensure our honey meets this standard.”