The tiny particles that could pose big risks

How risky does a food additive have to be before regulators ban or restrict it? Look at what’s happening with the pearly white colouring, titanium dioxide E171. Extracted from mineral ores, and also used to make paint, the International Agency for Research on Cancer classifies it as “possibly carcinogenic to humans”.

Now the European Food Safety Authority is re-evaluating whether the EC should revisit its stance on its safety now that four scientific studies have raised concerns. The main worry with titanium dioxide is that it contains nanoparticles that could pass from the gut or mouth into other parts of the body, such as the liver, ovaries and testes, where they could prove toxic or trigger chromosome damage. 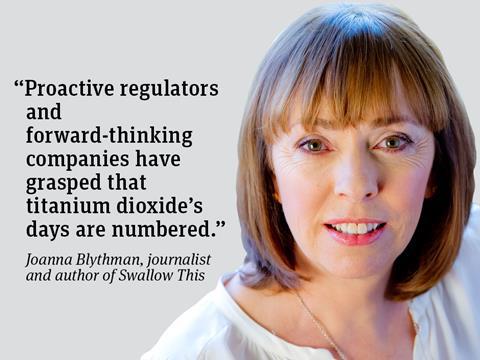 Experience shows that once an additive is approved and being used in food manufacturing, it tends to stay there, assuming a legitimacy it might not merit on safety grounds. Inertia, combined with active resistance from companies that don’t want to reformulate, sees to that.

But it’s interesting to see that Anses, France’s food safety authority, has recommended that manufacturers should instead use ‘safe products that do not contain nanomaterials and are equivalent in terms of function, efficiency and cost’. Proactive regulators and forward-thinking companies have grasped that E171’s days are numbered. It’s the very antithesis of ‘clean-label’.

That said, it will doubtless be years before its use is restricted. Yet think of the fate of colourings made from azo dyes, known as the Southampton Six. A major 2004 study from the eponymous university linked them to hyperactivity and allergies in toddlers. By 2011, they had to carry a compulsory health warning that in effect relegated them to the food industry sin bin.

Of course reformulation poses technical challenges for manufacturers, but it has to happen. Health fears around additives are generally brushed aside as insignificant, but what of the person who chews on iridescent white gum all day? Perhaps that person is also ingesting a daily cocktail of other additives that multiply the risk. Nanoparticles are vanishingly small but their risk to health could prove to be very large and horribly tangible.