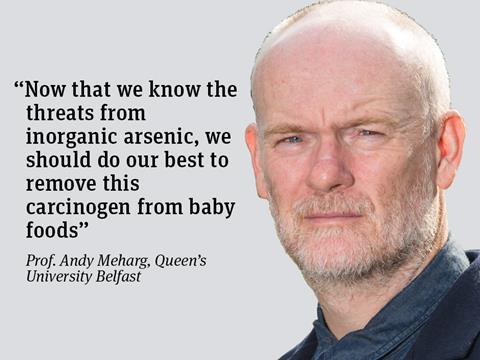 Inorganic arsenic is a human carcinogen - every dose adds to a cumulative risk - and rice is the dominant source of inorganic arsenic into the human diet. It has also been shown to affect both pre-natal and post-natal child development negatively.

The EU set standards to be implemented on 1 January 2016 regarding the amounts of inorganic arsenic legally allowed in rice products. This has led to a wider realisation that inorganic arsenic in rice is problematic, but the laws do not reduce the risk.

The EU inorganic arsenic standard for polished white rice is 0.2 mg/kg inorganic arsenic. As 98% of the entire global supply of white rice falls below this standard, there is little or no imperative for growers or producers to change anything. The standard for children under five is half this. However, when you consider that the risks of inorganic arsenic consumption are based on body weight, the actual exposure of a child, comparing the maximum adult and child standards, is 1.5 more. Then come rice cakes and puffed rice. The EU standard for these food items is 0.3 mg/kg - three times the children’s food standard!

So are there solutions to providing children with low-arsenic diets? Yes, lots, it just needs proactive food companies to think outside the box. Traditionally in western Europe we were weaned on mashed root fruit & veg, and other grain porridges. Rice is not particularly nutritious compared to these gluten-free alternatives, but it is cheap and easy to formulate. If suppliers must use rice for babyfoods, there are low-arsenic regions from which to source it. Also, 70% to 80% of inorganic arsenic can be removed from rice by the correct cooking. Or gluten-free grains can be substituted.

The notion of ‘safe’ versus ‘not safe’ needs to be addressed. Actual inorganic arsenic levels in baby rice products are around the 0.1 mg/kg EU standard. Under EU law, rice at 0.099 mg/kg inorganic arsenic is legal, but rice at 0.101 mg/kg is illegal. Both are unsafe. The EU standard for babies should be dropped to 0.02 mg/kg. We should do our best to cut it to as low a level as possible in babyfoods.