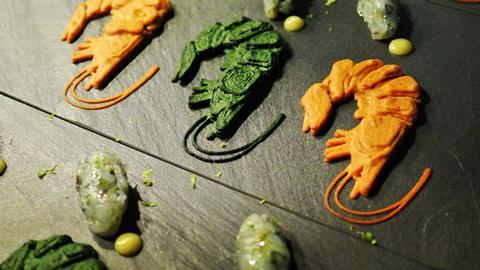 The term ‘3D printing’ still feels futuristic – but it’s edging towards mainstream use. Can it be applied in food en masse – and even help tackle food waste? This feature is part of our food technology special which includes insight into startup clean meat labs around the world and how a London insect farm is reimagining protein.

The term ‘3D printing’ conjures up images of futuristic geometric models and complex structures. In food too the technology has mostly been reserved for creating elaborate cakes and confectionery, rather than any practical, scalable use. But as 3D printers edge towards the mainstream - a basic 3D printer can now be purchased on Amazon for a few hundred pounds - could they be put to practical use in the food sector? Or will it always be a mere novelty?

There are countless companies making tentative use of 3D food printing for all sorts of things, whether it’s pastry chefs creating intricately-decorated pastries or high-end chefs delicately piping purée on to a plate. As yet, though, they have failed to reach mass production scale.

Three or four years ago, a craze emerged for using single-headed printers to print chocolate, which is fairly easy because you can melt it at 35 degrees, lay it down and it sets quite quickly. “You could argue that’s quite gimmicky,” says PA Consulting innovation lead Phil Fawcus. “It’s a decoration thing. Could you create a whole chocolate bar at that point? Probably not. Does it create any uniqueness or scale? No.”

At the same time, top-end chefs were using these printers to pump pea or carrot purée through something that looks a bit like an icing bag on to a plate. “Again, you could ask, what does that achieve in terms of scale? It’s all low-volume, niche, high-end stuff.”

There are difficulties when trying to take the tech mainstream - it just isn’t advanced enough yet. “At the moment [3D printing] is being used as niche to address very specific problems, for example preparing food that’s easier to swallow in hospitals or nursing homes. They are also good for presentation, for more ambitious chefs or cooks at home,” says Vaiva Kalnikaite, founder and CEO of innovation lab Dovetailed.

“The challenge with it is that we’re reusing a lot of old technology where the patent’s run out. There is actually very little innovation in terms of different techniques which could be built into 3D printers, but so far we’ve just been extruding things with paste. This isn’t particularly new, it’s just not been done with food before.”

However PA, along with others, has been working to make 3D food printing a more commercially viable proposition. “We want to use standard production lines that our clients have and make it happen at high throughput. Something like decorating a piece of food may take a minute to do, but that’s not the speed at which our clients work when making food products - they’re going through at tens or hundreds of minutes. So what we’re looking at is different print and laydown technologies that can do that faster.”

Fawcus explains the first thing the company did when exploring 3D printing was to lay down different flavours or fragrances on to a food, for example a jet of chocolate on a basic biscuit. This is called “additive manufacturing”.

“The next level might be to print a layer of chocolate at very high speed on to that biscuit, and that’s where I could do bespoke shapes or patterns,” says Fawcus. “The third level would be to somehow print that biscuit and then the chocolate on top of it. I would say we’re in the middle of that journey. We’re doing layers, but not the whole product. But we are doing that all at high speed.

“Understanding what the benefit [of 3D printing] is to the food industry is half the problem. What food manufacturers might want to do is give customisation and personalisation.”

Lynette Kucsma, co-founder of Natural Machines, says: “What could happen in supermarkets even today is that people can print things in store. For example, customised cake decorations or customised cookies.”

Some argue that 3D printing could also be used to help solve sustainability issues in the food sector. For example, Spanish startup Novameat uses the technique to create meat alternatives that can mimic the texture of beef or chicken. This, says CEO Giuseppe Scionti, should help reduce global meat intake and its much-discussed impact on the environment.

“What we think of as 3D printing now may change in the coming years,” he says. Novameat currently uses 3D printers with restaurants, and is looking at collaborations to come up with innovative solutions at small scale.

Another area is food waste. Kucsma argues the process could help allay wastage in the supermarket because they can use “ugly” fruits & vegetables or even cuts of meat that are perfectly fine but may not look visually attractive.

“You can put that through a 3D printer and make it look beautiful again, so it stays in the food chain and people actually eat it. It just needs to be presented better and that’s what 3D printing can do.”

With all these potential uses, could 3D printing ever become mainstream in the food industry? The National Farmers’ Union believes it could. A February report by the group suggested developments in 3D printing may have the potential to change the way the chemicals still available are used. “Emerging technology around the 3D printing of food may see new business pop-ups carrying out micro-fabrication [the process of creating miniature structures on a micrometre-sized scale] based on new flexible production techniques,” the report said. “Recent innovations in this technology… have made it possible to print, cook, and serve food.

“This can be achieved on a mass scale and, as well as simply producing intricate sculptures out of everyday foodstuff that looks good, it will also be used to improve the convenience and the nutritional value of meals. It may also reduce the need for some preservatives and mean less waste as food is produced on demand.” 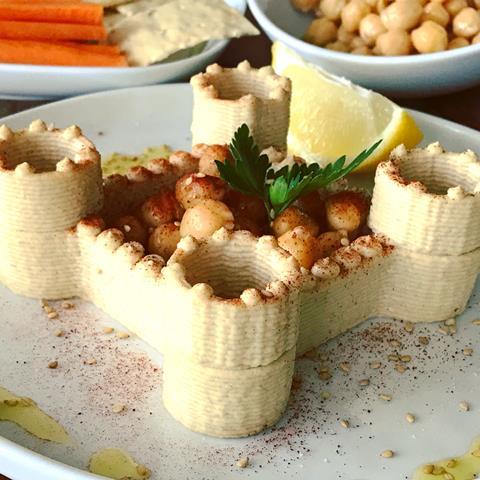 Kalnikaite suggests there is still a way to go before 3D printers become more widely used. “I think in the future we’re going to have printers that print lots of different techniques into one bite. 3D printers can’t do that just yet, so there’s quite a bit of innovation still to happen.

“But in terms of 3D printers for personalisation, and automation to a certain degree, it’s just that I don’t feel we have really executed it well at this stage. Also, it’s not being used widely yet. I think it’s certainly got the potential to be something that people will find useful.”

3D printing does fit in with the current trend towards convenience in the sector. “3D printers can be used to create something that is ready for a customer to consume and they just pick it up in a grocery store,” says Kalnikaite. “It’s definitely a possibility, but that does mean changing the ecosystem of transporting and producing certain types of foods.”

“There’s a push on zero-waste packaging, which is another thing manufacturers are looking at. It’s pretty much impossible the way manufacturing is today, but how they can do that with 3D printing is one of the things they’re looking at.

“But as a reality check, it will take some time because those devices have to get into the consumer market as well.”

The question of whether 3D printing could hit the mainstream still hangs in the balance. Clearly there are some practical applications for the technology in the food fmcg sector, but it will be a good 10 or 15 years before they become part of the industry’s everyday operations. 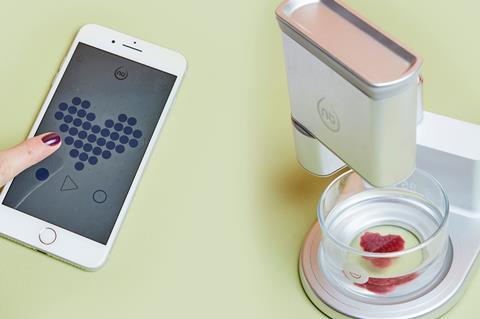 Dovetailed is a tech consultancy and innovation lab founded in 2011 and based in Cambridge. It works with multiple global brands and startups on inventing, researching and designing “experiences that complement our lifestyles and bring us joy”. One of these areas is 3D printing.

The company invented the Nūfood 3D printing robot, which it says can add both “visual delight and flavour sensations” to food. The tech uses a smartphone interface and a selection of ready-made flavour boxes to design and create unique shapes, explore exciting flavour pairings and “bring fun back into food”. 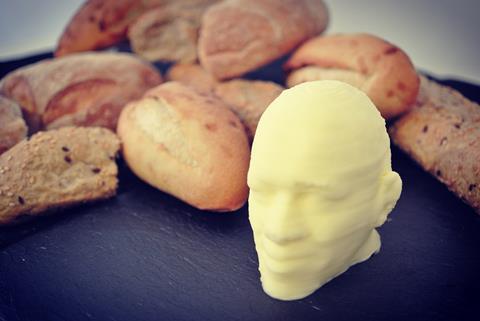 Co-founders Emilio Sepulveda and Lynette Kucsma started the US-based company after a conversation with a friend who owned a vegan bakery, wanting to expand outside its country of origin. The costs of doing so were high.

The idea behind Natural Machines is to create a “mini-manufacturing” kitchen appliance, which could exist in many individual locations, slashing the costs of central manufacturing and distribution and minimising the complexity of making the goods. 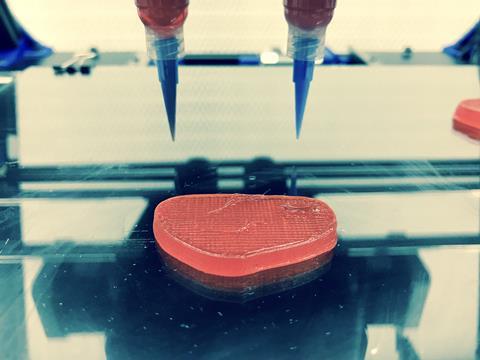 Novameat is a Barcelona-based company that uses a 3D printer from the Cim-Upc technological institute to print vegan “meat” using plant-based proteins.

The company uses tissue engineering and bio-printing to create a product that it claims has the same “fleshy” texture, appearance and nutritional values as meat, from ingredients such as rice, peas and seaweed protein.