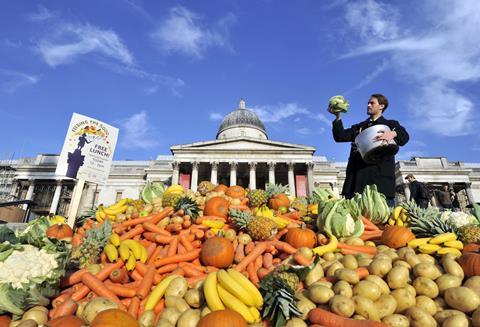 A leading food waste charity has accused the industry of failing in a 10-year battle for transparency on the issue.

Feedback, which held its first ‘Feeding the 5000’ event in Trafalgar Square in November 2009, highlighting how wonky veg could help feed the poor people, said hopes of a major breakthrough in reporting on food waste figures had “fallen apart”.

So far just over 40 companies have published their data, despite a new pledge by Wrap and the IGD to provide greater transparency under the Food Waste Roadmap.

But Feedback said it had now been 14 months since the Roadmap launched and suppliers were still hiding behind a “wall of secrecy”.

In September, Tesco CEO Dave Lewis called on the government to introduce mandatory reporting on food waste. Most of the companies to have published figures are Tesco suppliers who have joined its transparent report regime.

However, while retailers including Asda, Lidl, Co-op, Morrisons and M&S have published comparable food waste figures, many other retailers and suppliers have not yet done so.

“Last year it seemed like things might be about to change,” said Feedback food waste campaigner Martin Bowman. “When Wrap launched the Food Waste Reduction Roadmap, it was an unprecedented move. Nearly 100 businesses signed up to measure and publicly report their food waste.

“Even better, they committed to halving food waste ‘from farm to fork’ by 2030, in line with the UN’s global goal - far more ambitious than previous UK voluntary agreements had been. No longer would companies be allowed to hide behind pan-industry commitments and vague greenwash. They would be held publicly to account against concrete targets.

“However, just over a year on from this announcement, my hopes that voluntary agreements might have been able to deliver adequate action have fallen apart.”

He added: “Ultimately the problem is the model the government and industry have chosen - voluntary industry agreements.

“Bear in mind that even if the ‘roadmap’ agreement was on track, we’d still have to wait until 2026 for all of the UK’s 250 largest food businesses to be reporting their food waste: a full 13 years after the first-mover in this field, Tesco, started publishing its data.”

“But even the first 90 businesses who signed up last year with much fanfare have largely failed to come up with the promised transparency.”