How to level the waste playing field 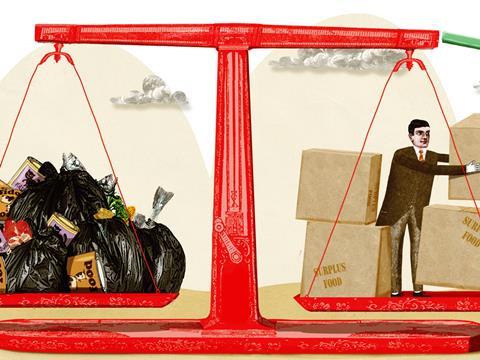 Laziness. Old fashioned thinking. Wilful ignorance. Cost. Stubbornness. Causes behind the 1.9 million tonnes of food wasted by the UK’s food and drink industry are many and complex. Some will require seismic shifts in behaviour spanning years to overcome. Others lengthy trials to convince supermarket CEOs to change their ways.

But there is one problem for which the solution is simple. It’s a solution that will rescue thousands of tonnes of food from incineration. Feed millions. And cost a quarter of the staggering sums ploughed into Kids Company by the Department of Education.

Working with FareShare we’ve calculated that by providing around £10m per year the government could incentivise redistribution of up to 100,000 tonnes of surplus food, and help hit The Grocer’s target to double redistribution in one fell swoop. Why is this necessary? And how would it work?

How do the figures stack up?

The cost of redistributing food is around £100 per tonne (based on 20 years of FareShare client data). This £100 is made up of two elements:

→£70 for labour and storage. (To redistribute food it must be kept edible which requires additional labour to segregate and store surplus).

→£30-50 for transport.(Hauliers and food businesses say that’s the approximate cost of then transporting one pallet of food, or one tonne).

→If a manufacturer opts for AD or animal feed over redistribution they could be paid up to £60 per tonne.

→For a business this makes AD or animal feed a more attractive proposition than redistribution.

How would this tax break work?

→ A business provides proof of receipt for food delivered to a redistributor. This is tax deductible.

→ Alternatively the tax break could be split between a manufacturer and a haulier.

→ If The Grocer’s target of 100,000 tonnes of redistribution was hit it would cost government £10m per year

Why should the government address this?

→ This would cost Defra in the short term but in the longer term would be sustainable.

→Savings for charities could be worth £200m, FareShare estimate, reducing reliance on government funding by up to 20 times the value of the initial investment.

Redistributing food costs UK food businesses on average £100 per tonne. In an industry of increasingly small margins it leaves cash one of the biggest barriers to improving on the UK’s woeful levels of redistribution, which are currently less than 2% of total surplus according to Wrap figures.

“We’ve not met a single individual or corporate brain that doesn’t think diverting surplus food is anything other than absolutely the right thing to do,” says FareShare chief executive Lindsay Boswell. “However there is a real additional cost to doing the right thing.”

And that effort and expense is even less appealing to every food business because there are far cheaper options for disposal. Though landfill has become increasingly pricey, with taxes adding up to £84 per tonne, green subsidies mean anaerobic digestion (AD) costs businesses as little as £40 per tonne, according to Wrap research. Less than half the calculated cost of redistribution.

Indeed, manufacturers are sometimes even paid to send their waste to an AD plant - up to £60 per tonne - depending on the area and time of year, FareShare says.

That makes it “much, much easier to get some goodness out of surplus food, by sticking it into anaerobic digestion than it is to keep it in a fit state for human consumption and get it redistributed,” adds Boswell.

Yet anaerobic digestion isn’t the enemy.It’s an ally in fighting food waste, turning surplus headed for the bin into clean energy. And it faces challenges of its own, with proposed cuts to feed-in tariffs from government of of up to 100% for large AD plants and 27% for smaller operators. If they go ahead the proposed changes will “end new AD projects planned for the UK,” warn the Renewable Energy Association. That would be a blow for efforts to curb food waste because “if all domestic food waste was diverted we’d need an AD industry that’s much, much bigger,” says Boswell.

And, of course, “in some cases it is necessary to send surplus food to AD rather than using redistribution strategies” says commercial director at ReFood Phillip Simpson. “Out-of-date produce, for example, poses a health issue - making AD the only viable option - as do off-cuts from butchers’ shops that cannot be fed to livestock due to legal restrictions.” “It isn’t one or the other,” adds managing director at Bio Collectors Paul Killoughery. “Everything has its place.”

But edible food shouldn’t end up at an AD plant. And the current system has left options to business skewed toward this outcome.

“At a time when food assistance providers do not have enough donations to keep up with unprecedented levels of need, we must make sure much more available surplus is used to feed people,” says MP Kerry McCarthy, who lobbied government to address the problem via her 2015 Food Waste Reduction Bill. 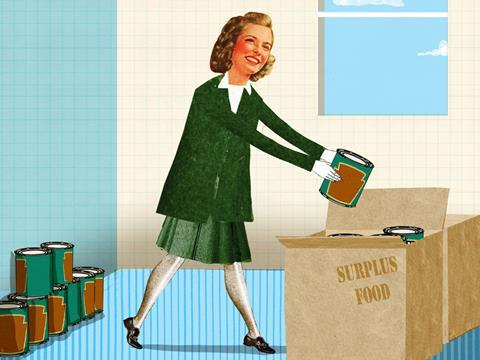 To bring it back into balance wouldn’t require huge investment. To cover the costs for redistributing edible food - enough to cover the cost of sorting, packing and transport - would cost the government up to £10m per year. That would fund 100,000 tonnes of redistributed food and could be paid to businesses via tax breaks overseen by Defra. This per annum cost would start small, only rising incrementally as redistribution increases too.

A similar model is already used in France, where some estimate redistribution levels are 10 times higher than the UK. Retailers and manufacturers there receive a tax break of up to 60% on any donation, capped at 0.5% of annual turnover.

Cheaper than sending to AD

The system hasn’t been without its “teething problems” says Dr Julian Parfitt, resource policy advisor and practice leader at Anthesis and one of the world’s leading authorities on food waste.

As the size of the tax break reflects the “book value” of the redistributed food, it arguably encourages some retailers “to donate the food a number of days before the expiry date, when the book value is higher.”

“These issues are still in the process of being resolved between ministers, redistribution charities and food businesses in France,” he adds.

Crucially, though, our plan doesn’t pay businesses for the quality of their surplus. It merely refunds them for the calculated cost of selecting and transporting any and all edible food they can’t sell.

“We’re not interested in trying to create a mad economy that encourages the food industry to over-produce,” explains Boswell. “No food business is going to be incentivised to create waste” and its most profitable option will always be to sell as much food as it makes.

It is also estimated that France spend around €143m per year implementing their tax break, more than ten times the £10m required by this scheme. A more efficient national network of redistribution in the UK, compared to more fragmented, localised schemes in France, make this saving possible, say FareShare. 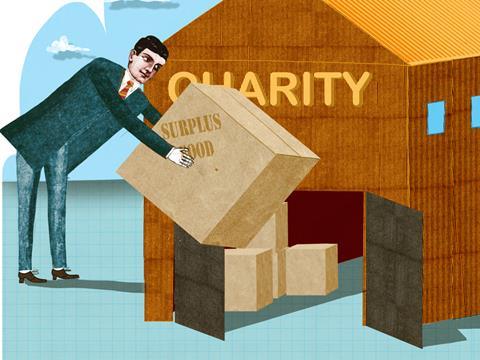 Will the government act?

But at a time where Brexit looms and the deficit widens why do we think the government will act?

After all we aren’t the first to ask. McCarthy has “regularly pressed the government to acknowledge these differences in cost and to assess how to align economic incentives - or disincentives - more effectively within the food use hierarchy”.

FareShare says “constructive conversations” have failed with Defra, too, as the department denies the existence of the current skew.

But not only do we hope to have the weight of industry behind us, there is a solid economic reason for the government to act.

Though it would require upfront investment from Defra it would quickly deliver an ROI that would leave it self-funding in the long term.

That’s because the 10,000 tonnes of food currently redistributed to UK charities equates to a value of £19.6m for the voluntary sector. Increasing this figure 10-fold would push this up to a potential benefit of between £150m-200m, FareShare calculates.

“In parallel universes within government there are all sorts of grants to the voluntary sector, and in those pots £10m is almost nothing - one fifth the amount Kids Company had, for example,” says Boswell. “To be able to turn £10m into £150-200m is quite an extraordinary return on investment. So there’s a compelling economic argument here.”

Amoral and ethical one too. Cutting back the tonnes of good food chucked out or turned into green energy is the right thing to do. And we aren’t the only ones to think subsidies could be a low-hanging fruit.

“Agreeing to subsidise the redistribution of surplus food would make a huge difference,” says Simpson. “As well as supporting those in need, targeted government funding would help to divert edible food away from landfill.”

McCarthy says she’s “delighted The Grocer has moved this debate on with new costings of its own” and “will urge the Environment, Food & Rural Affairs Committee to consider them in its current inquiry on food waste”.

For Boswell it’s a “no-brainer.” “If we can create an even playing field so a food company isn’t out of pocket by doing the right thing, wouldn’t that be great?”

Our campaign so far

It’s been three months since The Grocer launched its campaign to fight food waste across the food and drink industry.

We had three goals:

- To double the amount of edible food being redistributed by industry to 100,000 tonnes

- For government to incentivise the redistribution of edible food

- To achieve greater engagement, transparency and cooperation among industry

And we’ve won the support of some of the biggest names in fmcg including Nestlé, Tesco, Morrisons, Aldi, Waitrose and M&S.

But we’re only just getting started.