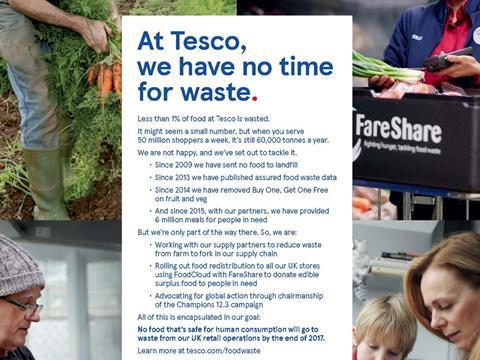 Speaking ahead of a new report released on the UN Champions 12.3 initiative next week, Lewis said he had concerns that some industry redistribution schemes could lack the rigorous traceability running through its own Community Food Connection scheme.

The Tesco boss told The Grocer: “I’ve seen, I won’t name names but, I’ve seen a number [of people] who say, ‘No it’s OK we donate it, we put it on a website’. But when you ask where does the food go after that? No idea.

“What really worries me here is that if I were to donate in that way, and they took that donation, and they treated the food badly and in three days’ time it pops up on a market stall in Peckham, then if somebody were to buy it in good faith, and then have a problem, it would have my brand or someone else’s brand on it. That would be a disaster.

Launched in February 2016 Tesco adopts a “triangular” approach to its food redistribution with the Food Cloud app matching store surplus with local charities that have been “accredited and introduced” by FareShare UK. Already active in 974 large Tesco stores, the initiative has now been rolled out into 200 smaller stores with the mult redistributing the equivalent of six million meals since 2015, an achievement highlighted in its latest No Time for Waste campaign, which launched this week with ads in national press.

Using this system “if there was to be a problem I could trace it all the way back”, added Lewis.

FareShare director of food Mark Varney reiterated that these processes helped the organisation, which works with a number of the major retailers, provide food to 5,589 charities last year. “By maintaining ongoing relationships with charities, FareShare is able to ensure food safety compliances are met from the point of view of the food itself, as well as its storage, preparation and use,” he said.

But for Nick Davies, founder of social network Neighbourly, which works with both M&S and Lidl on their redistribution schemes and publishes “fully visible” data on where food ends up, the comments came as a surprise. “I’ve not seen anything that causes me the concern in the tone Dave Lewis is suggesting,” he said. “Of course, these safeguards should be in place, it’s fundamental we cannot put lives at risk but at the same time we have to help save lives by getting food out there, so it’s always a careful line to tread making sure we act professionally but at the same time connecting as much as possible.”