M&S launches beers and ales made from surplus sandwich bread 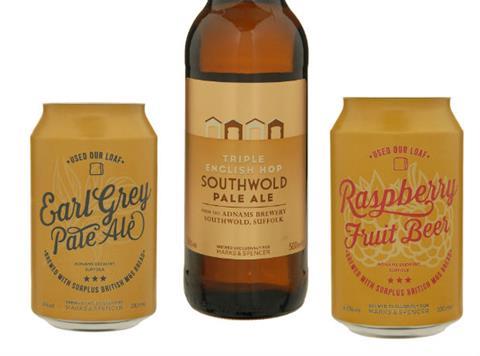 Used Our Loaf, beer made from bread from M&S

M&S has launched a range of beers and ales made from surplus sandwich bread.

In an attempt to counteract the 24 million slices of bread wasted in Britain every day, according to a report by the BBC’s Inside the Factory programme, M&S will start selling a new own brand beer and ale range - Used Our Loaf.

The drinks are available in some M&S stores, and will soon be available for online orders.

M&S supplier Adnams uses the crusted ends of sliced sandwich loaves, which are frozen by M&S sandwich supplier Greencore before being sent to the brewery’s headquarters in Southwold, Suffolk, to create the beverages. In addition, surplus crusts are mashed down into the mix and replace some of the malted barley traditionally used in brewing.

Each batch of the drinks uses 700kg of surplus bread with three times the quantity of malted barley.

Drinks available in the range are a triple English hop pale ale (£2.50) and a raspberry fruit beer (£2) in 500ml bottles, and an Earl Grey pale ale in 330ml cans (£2). If they prove popular with customers, the process will be rolled out across a wider range of beers.

M&S also said the beers, added to its Plan A sustainability programme, will help reduce its CO2 emissions by 1.2 tonnes.

“We wanted to find a way to use the surplus bread from our sandwiches in a more useful and environment-friendly way,” said Richard Applegate, an M&S beer technologist.

Chris Young, coordinator at the Real Bread Campaign, added: “It’s great that bakeries and retailers are teaming up with social enterprises and charities to stop so much food being wasted. But the real problem lies with the big industrial loaf manufacturers and the supermarkets. We’d like to see far less surplus being generated in the first place.”

● The Grocer has launched a petition to help fund the cost of redistributing more edible surplus food to charity, which has so far gained more than 15,000 signatures. If you haven’t signed yet, click this link: https://petition.parliament.uk/petitions/204156