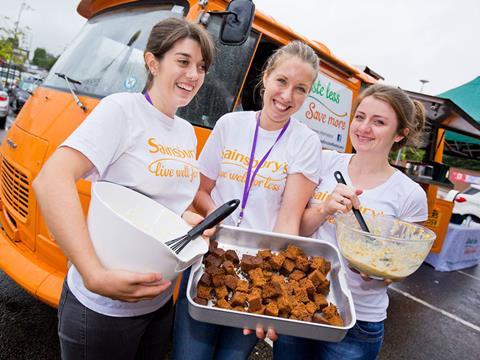 Sainsbury’s is pressing ahead with its five-year food waste programme despite being likely to miss its target to halve waste as part of an initial trial.

The retailer said today that it was spending £1m in the Waste Less, Save More programme next month. It will give 150 communities up to £50,000 to put towards reducing food waste in their area.

The investment will be part of the £10m Sainsbury’s had originally allocated for the five-year project. The news comes on the back of a report in The Guardian in which Sainsbury’s head of sustainability Paul Crewe appeared to suggest that its year-long trial in the market town of Swadlincote would fall short of its target to halve the amount of food waste generated by residents.

Crewe told the Guardian; “Waste Less, Save More is a brand new way of working and completely different to what anyone has done before, so it was hard to define a measure of success. That said, we really wanted a stretching target to drive results and we’re really proud of the progress that has been made at a household level. I always say that we’re aiming for the stars, so it’ll still be a success if we land on the moon.

Having spent the last year getting under the skin of household food waste, we have realised that this kind of behavioural change won’t happen overnight, but we have definitely seen positive progress on what will be a longer journey,

“What’s more we’re now looking to take the campaign nationwide. Even if we inspire small changes within our communities, these will add up to have a big impact.”

The Swadlincote trial kicked off last January and the results of the first year, evaluated independently by Wrap, are due to come out in May. Sainsbury’s said it was too early to comment on the results of the programme, which employed a range of tactics to help consumers reduce food waste such as smart fridges and food sharing apps, but stressed anecdotal feedback had been “very positive” and it was keen to inspire “longer-term change”.

The retailer released a statement this morning to rebuff The Guardian’s original story that suggested it was abandoning the scheme altogether. As part of that statement, the retailer again seemed to suggest that it may not hit its target.

“As we started our extensive trial year in Swadlincote, we had an ambition to help households to reduce food waste by up to 50%,” it said. “This was always a very stretching ambition - and we will find out the results in May when we’ve done the full analysis. What we now know is that the town of Swadlincote has been fantastic to work with, and we have achieved a huge amount in the first year of the campaign.”