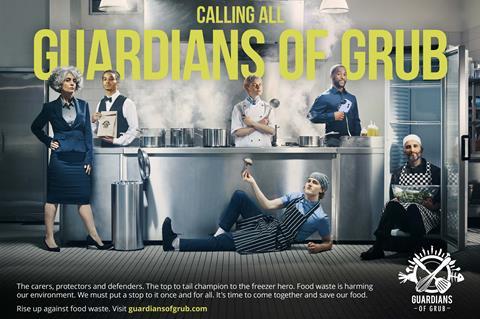 The campaign is aimed at everyone in the hospitality sector, from Michelin-starred restaurants to local pubs

A new initiative has been launched to tackle nearly £3bn of food wasted across the hospitality and foodservice sector every year.

The Guardians of Grub, developed by Wrap, will be launched today as part of the symposium called by the government’s new food waste champion Ben Elliot.

Senior business figures, environment secretary Michael Gove and some of the UK’s best-known restaurateurs and chefs will be at the event today.

Wrap said the campaign was aimed at everyone from Michelin-starred restaurants to local pubs. It was based on making simple, low-cost changes to the way food was bought, prepared and served.

The sector is responsible for 10% of the total 10.2 million tonnes of food wasted in the UK each year, with the cost of avoidable food waste varying between 38p and £1 for every meal it serves, according to Wrap. Previous research by the World Resources Institute and Wrap across 700 companies operating in 17 countries found a high return on investment for activities implemented to reduce food waste. The average business saving across multiple sectors was shown to be more than £14 for every £1 invested by a business into reducing food loss and waste.

A string of hospitality and foodservice representatives have pledged their support for the initiative, including the BBPA, FWD and UKHospitality. A suite of free materials has been produced for the Guardians of Grub, including information posters and how-to guides, and a free calculator to record the changes made to food waste.

The launch will be followed by a month of action in September called Stand up for Food.

“We will not tackle the impact of global warming if we don’t fix the food system, and everyone needs to play their part,” said Wrap CEO Marcus Gover.

“If everyone in the hospitality and foodservice industry put as much passion into reducing waste as they do into creating delicious food, it would make a massive difference to cutting the damage food waste is doing to our planet.

“Through this great new campaign, we are showing how everyone can reduce food waste without compromising on quality, or customer experience, and save money. It’s a double win; for the environment and for business.”

Elliot said: “This campaign brilliantly shines a light on the food waste epidemic.

“Initiatives like this provide a strong foundation for change.”