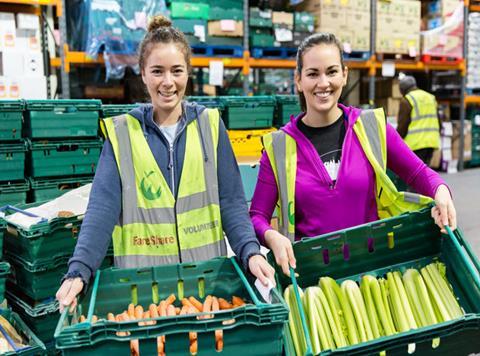 A landmark report today by Wrap reveals beyond doubt that the food and drink industry has woken up to the scandal of food waste – and its own failure to redistribute to those that need it.

However, if ever there was a report with a sting in the tail, this was it.

On the surface, Wrap’s document appeared to show undiluted good news. The industry has increased the amount of food surplus sent to charities and commercial redistribution organisations by 51% in a two-year period, from 28,555 tonnes in 2015 to 43,034 tonnes in 2017. Also encouraging is that the greatest gains were in the form for charitable donations, up 80% from 11,655 tonnes to 20,935 tonnes.

But in the small print not all was so rosy. Wrap declared that its previous estimate of the role played by all parts of the sector in making sure surplus food goes to those that need it was hugely overblown.

Whereas its 2016 report estimated 47,000 tonnes of food was redistributed by the industry, today that figure was revised downwards to just 28,500 tonnes, nearly half as much as had been estimated.

Wrap said “improvements to the research methodology” and “more robust and granular data from redistribution organisations” led to the revision.

The result only goes to show why it is so important for the industry to step up its efforts still further.

It’s hardly surprising, of course, that Wrap’s 2016 report was such a stab in the dark. When The Grocer launched its Waste Not Want Not campaign in May of that year, just after the report was published, it revealed how its authors had been astonished to find doors literally slammed in their faces when they approached certain suppliers to try to get to the bottom of the food waste picture.

Since then there have been big breakthroughs in transparency, such as Tesco’s landmark move last year to start publishing the food waste figures of 24 of its major suppliers.

Retailers and suppliers have at the same time stepped up their work, while tightening links with the likes of FareShare.

But as Wrap points out today, much, much more remains to be done. It estimates that at least another 205,000 tonnes of food waste could be redistributed per year, nearly 10 times the current figure.

Wrap points to huge opportunities in primary production, as well as an acceleration of food redistribution in the hospitality sector, where progress in the past two years has been far more slow, as just two of the areas.

And while the government today patted itself on the back, despite its frankly lacklustre efforts to treat food waste seriously (its grants to food waste charities have been frankly minuscule), it too needs to looks at these revised figures and view them as a wake-up call.

As FareShare boss Lindsay Boswell says, the sort of progress detailed in the report will never be enough to achieve the potential for food waste reduction and redistribution, as long as incentives remain to make it more profitable for companies to send perfectly good food to anaerobic digestion plants.

As he says: “Good, edible food should not be turned into energy – it should be going to feed vulnerable people.”

Thanks to the industry’s response, far more of those vulnerable people are now being helped and there is a sense that they are now on the industry’s radar. The twist in today’s figures shows it is time to redouble those efforts.