Farmageddon digested: What are the challenges facing food supply? 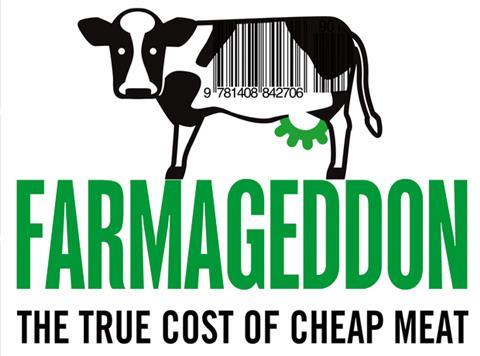 Billed as a “wake-up call to change our current food production and eating practices”, Farmageddon makes the case against what Lymbery calls ‘factory farming’. Farmageddon’s central tenet is that when farming goes super-sized, it creates super-sized problems – for animals, the environment, and ultimately for the people who produce and consume its products.

It’s not a UK-specific book (the idea is very much that Lymbery takes the reader on a journey of what he considers to be problematic farming practices around the world), but examples from UK food and farming do feature – including the planned ‘megadairy’ at Nocton in Lincolnshire – and they are likely to reignite the debate about large-scale farming as well as the pros and cons of ‘sustainable intensification’.

The battle lines are already being drawn. Red meat levy body Eblex was yesterday quoted in the meat industry press as saying Farmageddon paints a picture of livestock farming that “bears little or no resemblance to the farming systems routinely used for beef and sheep in England”, adding “it is therefore difficult to give it credibility as a commentary on the beef and lamb we produce”.

Refusing to engage with Farmageddon, even if you wholeheartedly disagree with its proposition, would be foolish

Meanwhile, one British cattle farmer responded to one of my tweets about Farmageddon earlier this week with the assertion that “looking at who wrote it is obviously a fictional novel, definitely won’t be a lot that’s factual in it”.

There’s no question that CIWF and Lymbery have a knack for rubbing some farmers and those in the food industry up the wrong way, particularly with their stance against large-scale farming. But refusing to engage with Farmageddon, even if you wholeheartedly disagree with its proposition, would be foolish.

CIWF is one of the smartest, most high-profile campaign groups around, and its relatively moderate campaigning positions – as Lymbery says in Farmageddon, it is “not anti-meat”, “not anti-GM per se” and “not anti-corporate” – give it a level of credibility with the public that many other, more narrowly focused groups lack. Consumers will interpret quick, one-sentence dismissals as nothing more than the industry refusing to be held to account on its business practices.

(And here’s another thing some producers possibly don’t want to hear: aside from the RSPCA’s Freedom Food awards, I can’t think of any awards retailers and major brands are so keen to push as those handed out by CIWF. We get inundated with press releases whenever they are announced. Supermarkets and big brands know that consumers care about these organisations’ opinions and covet their endorsements.)

I am therefore looking forward to a proper, substantive debate once the book is published next Thursday instead of merely an exchange of entrenched positions. What do you think Farmageddon gets right, and where is it barking up the wrong tree? Which of its proposals are sensible and which are pie in the sky? What’s your best, most persuasive counter-case against its arguments on large-scale production systems?

As always, you can let us know by tweeting us @thegrocer, leaving comments in the comment section or by sending us a letter to letters@thegrocer.co.uk

In the meantime, here’s a quick crib sheet on some of the book’s key recommendations to industry and consumers:

Stop monocultures. “Mixed farms where animals are rotated with soil-enhancing crop rotations should be encouraged. Restoring the natural link between farm animals and the land needn’t require huge amounts of space. The UK, for example, rears over 800 million meat chickens a year. Keeping them free-range would need an area around a third of the size of the Isle of Wight – less than one-thousandth of the nation’s total farmland.”

Rear ruminants on pasture, and pigs and poultry on food waste and through foraging. The latter would help reduce reliance on imported animal feed from South America but would require concerted government efforts to make food recycling easier, along the lines of models already used in South Korea, Taiwan and Japan, the book says.

As for consumers, the book recommends…

Don’t overeat meat and focus on quality over quantity: “Consumers, governments, corporations and civil society should work together to promote healthy, sustainable balanced diets that, in Western countries, avoid overconsumption and instead include better-quality meat from animals kept in higher-welfare conditions.”

Look out for labels saying free-range, pasture-raised, outdoor-reared or organic – be sceptical of ‘farm fresh’, ‘country fresh’ or ‘natural’ and avoid ‘corn-fed’. “But isn’t organic milk the domain of the well-off and haute cuisine? In Britain, McDonald’s restaurants offer only organic milk for their hot drinks.”

Avoid carnivorous farmed fish, such as salmon, trout, cod and halibut “as these are likely raised on feed made from wild fish”.

Buy local: “Of course, just being local doesn’t mean that the food hasn’t come from a factory farm. But buying from a supplier you know or a local farmers’ market, or buying local produce from the supermarket, are all good ways to reduce your carbon ‘footprint’ – less transport needed to get the food to you.”