Summer of farming discontent looms in beef if not in dairy 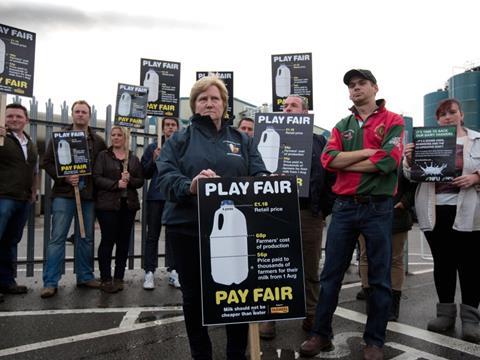 After a period of quiet, farmer protests are back on the public agenda.

Farmers for Action (FFA) - the campaign group that played a key role in the dairy farmer protests of 2012 - is zeroing in on the beef sector, vowing to take “urgent action” over falling beef prices. There are fresh grumblings in dairy too, with a small group of protesters gathering at Dairy Crest’s depot at Foston last weekend to voice their anger over the recent milk price cuts by major processors.

For retailers and suppliers, these developments will bring back vivid memories of the summer of 2012, when the #sosdairy campaign generated a frenzy of negative headlines, forced retailers to pay farmers more for their milk and ultimately resulted in the introduction of the dairy industry voluntary code of conduct - a major change in contractual relationships that gave farmers more power against processors.

So with the spectre of farmer protests raised once more, does the supply chain need to brace itself for another summer of farmer discontent?

On the dairy side, the answer appears to be no. Although recent price cuts have clearly angered some, dairy farmers are in a much better place now than they were in 2012, when cuts to milk prices were compounded by rising input costs. This time, input costs are lower and although farmgate prices have come down recently, they remain comparatively high.

“The climate is remarkably different,” says one processor-side source. “There is a small group of hotheads who believe milk prices should never ever go down, but we haven’t seen a groundswell in social media, so we don’t think there is a widespread appetite for protests.”

This is echoed by the National Farmers Union (NFU), which says the dynamics of the UK’s raw milk market were dysfunctional back in 2012 but have since changed significantly. “News of price cuts will be disappointing to our members, who have important investments in the future to make, but they are symptomatic of tough market conditions rather than market dysfunction,” says dairy board chairman Rob Harrison. “It is important that when dairy commodity markets do recover that these gains are translated into milk price rises. The NFU will remain in close dialogue with milk buyers in the coming days and weeks.”

Another source agrees dairy protests are unlikely for now, but warns the mood could turn quickly should market conditions change. “If milk prices stay above 30 pence per litre, which is historically high, then I don’t think there will be broad disturbances. However, if global markets were to stabilise and the price cuts keep coming then we could be back in 2012 territory.”

On the beef side, however, major protests seem a real possibility. There’s the FFA threat, of course, but also growing unease elsewhere in beef farming - and it’s supermarkets rather than processors that are in the firing line.

The issue isn’t simply falling prices - which have come down largely because supply in the UK and from Ireland has increased - but because farmers feel retailers aren’t doing enough to offset increased supply by stimulating consumer demand. “A year ago, retailers were worried about not being able to get their hands on enough British beef and now, when there is more available, we are not seeing the kinds of deep-cut promotions to really drive consumption,” says one.

“The retailers have very short memories - since Horsegate, the relationship has gone out of the window,” adds Andy Foot, chairman of the NFU beef group. “Twelve months ago, 58% of the final price of a sale went to the farmer, now it’s less than 50% but prices are not down in the shops. If they were, we wouldn’t be able to argue.”

Retailers have rejected suggestions they have protected their margins at the expense of farmers: the British Retail Consortium’s Andrew Opie told The Grocer last month “retailers are investing in their own chains, are paying the best prices to the beef farmers who supply them, and are not the cause of this short-term fall”. But farmers’ gripes go further. Price volatility is a key challenge, and they want to see better protection from retailers and processors. “We’re living with boom and bust, which leaves the industry in a terribly volatile state, and there is no long-term vision from meat processors, retailers and our customers,” says Foot. “We need to enter into a serious discussion about the long-term outlook for British beef.”

A voluntary code of conduct - similar to the one already in place in dairy - could be one way to achieve this. Setting minimum and maximum pricing thresholds to help farmers manage volatility would likely be a key part of such a code, but farmers are also keen to see minimum notice periods on contract changes and amendments to specifications as well as greater transparency and consistency on abattoir charges.

“We need that type of vision - the retailers and processors say they want to engage with us, but actions speak louder than words,” says Foot. “We need a code that gives us sustainability and promotes best practice.”

Who would be in a position to drive the creation of such a code is less clear, however. The dairy code was helped along significantly by the involvement of Defra, with then-farm minister Jim Paice taking a hands-on role in getting retailers, processors and farmer organisations to agree to a compromise. So far, there is little indication the department is looking to do the same on beef.