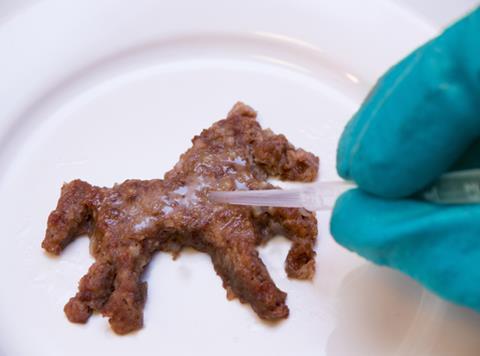 Proteomics will “boost the fight against food fraud”

Scientists are stepping up the fight against Horsegate-style food fraud with a new type of meat test that can detect any unwanted species in processed meat products.

At present, industry and regulators have to know what they are looking for when testing products, as DNA tests can only detect, say, horse if a specific test for horse DNA is run.

However, proteomic tests being developed could be used to identify any unwanted species in a meat product, even if it was not currently on the radar as a potential fraud risk, said Adrian Charlton, head of chemical and biochemical profiling at Defra research agency Fera. Furthermore, they would allow processed meats to be tested more robustly, he added. DNA gets destroyed during heavy food processing, limiting the usefulness of DNA tests for processed products, but this was not the case with proteomics, which tested for protein.

“This should give us much better methods than were used before,” Charlton said. Defra added Fera’s work was part of efforts to develop “world-class food testing technology that will help us better detect fraud and clamp down on deliberate attempts to deceive the consumer”.

The first stage of Fera’s research is expected to be completed in mid-2014. Fera had not yet assessed the likely cost of the tests, but Charlton said he expected it to be similar to PCR DNA tests and the ultimate aim was for proteomics to become available as a routine test.

Fera’s research into proteomics for processed foods builds on work it completed earlier this year on validating tests to determine gelatine species in products. Proteomics had been used for some time to detect unwanted pork and beef protein, but had now been trialled for horse as well, Charlton said. The results of the gelatine-related work will be published shortly.