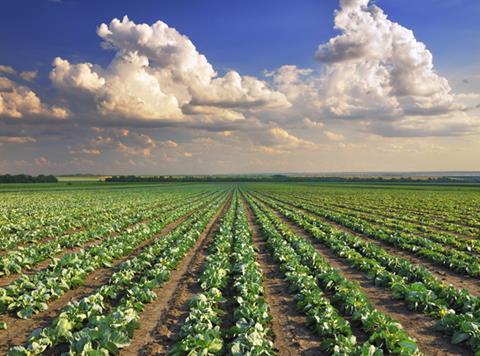 The UK government must show greater leadership and clearer lines of responsibility on the issue of food security, a new report by MPs has warned.

The Environment, Food and Rural Affairs Committee (Efra) also said the UK needed to increase its self-sufficiency in key food commodities and reduce its reliance on imported food and feed.

“If we are to curb emissions and adjust to climate change, we need a significant shift in how the UK produces food”

“At least three departments are now responsible for food security—Defra, BIS and DECC,” said Efra chair Anne McIntosh. “To ensure coherent planning and action, overall strategy must be led by Defra, who must ensure a robust approach right across Whitehall.”

Efra’s report – published today – said the UK was just 68% self-sufficient in foods it could produce itself, down from 87% 20 years ago. It identified imported animal feed – especially soybean – as an area where UK food security was especially vulnerable, given growing demand for protein from emerging markets, and called on the government to take action to reduce the UK’s reliance on feed imports.

It also urged supermarkets to shorten their supply chains so as to better protect them from possible disruption, and for British farmers to boost the UK’s self-sufficiency by extending seasonal production of fruit and veg.

The report said climate change and more volatile weather patterns were the number-one threat to UK food security, and the government should produce a detailed plan for reducing the emissions of the UK’s farming sector.

“If we are to curb emissions and adjust to climate change, we need a significant shift in how the UK produces food,” McIntosh said. “Farmers also need better longer-term weather forecasts and more resilient production systems to be able to cope with severe weather events such as the floods that devastated the Somerset levels last winter.”

The Efra report also warned the UK’s current agri-tech strategy was not sufficiently funded, and said the government should spearhead efforts to educate consumers about the potential benefits of genetically modified crops.

A spokeswoman for Defra said the report recognised the UK’s food security was well protected. “We invest £450 million every year to uphold it, but we are not complacent which is why our £160 million agri-tech strategy is investing in developing new resilient varieties of crops, more efficient use of water and a world class centre of agricultural innovation. We are confident our efforts will help us meet future demand for food.”

Melanie Leech, director general of the Food and Drink Federation, said the FDF agreed the UK had the potential to increase exports and “substitute for imports in areas where we can develop the capacity to do so”.

She added: “We agree with the need for a more joined-up approach to policy making in these areas, both in the UK and in Europe, and with the importance of informed, evidence-based, consumer choice in relation to issues like new technologies and the health and resource implications of what we eat. Addressing these challenges is a shared responsibility for government, industry and other stakeholders within a clear strategic framework.”

Duncan Williamson, food policy manager at WWF UK, said he was pleased Efra’s report recognised the importance of government departments working together to deliver food security. However, he urged caution over Efra’s support for sustainable intensification. “We need to be cautious about arguing that the food security debate is all about producing more with less,” he added.

“Food security must be genuinely sustainable, with social and environmental considerations at its heart. We also need to think and talk honestly about what we eat. We should be moving to diets that are less meat and more plant-based – this would place less pressure on the planet’s systems, and be better for our health and well-being.”

Dairy UK CEO Judith Bryans said food security was a key challenge, which the dairy industry was committed to tackling. “As an industry with a short supply chain and a proud track record in producing safe, nutritious products, the UK dairy industry is well positioned to meet the challenges of food security and it is working to generate more exports and tackle import substitution. We welcome recent support for the dairy industry from across the political spectrum and will continue to work with all relevant government departments, particularly Defra with whom we have an very constructive relationship, in the hope of assisting government meet its food security objectives.”

The Crop Protection Association, whose members include Bayer CropScience and Syngenta, said the government needed to make sure its agri-tech strategy was properly funded to deliver on its food security ambitions.

“However, it’s not just about ensuring the R&D pipeline is properly funded and structured – it must be accompanied by a regulatory system that doesn’t stifle innovation by preventing farmers from having access to the tools they need,” said CEO Nick von Westenholz.

“The UK government must challenge the current approach being taken by European regulators and policy makers on issues such as pesticides and GMOs, which demonstrates an over-emphasis on precaution that fails to recognise the vital role these technologies must play in feeding the world.”