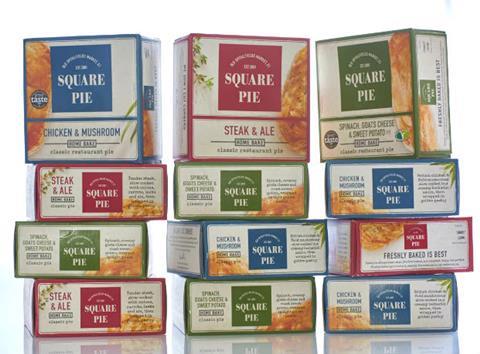 Gourmet pie business Square Pie has teamed up with Sainsbury’s to launch its first frozen range.

The trio will be rolled out into 400 of the retailer’s stores nationwide from Monday next week (4 April) in steak & ale, chicken & mushroom, and spinach, goats cheese & sweet potato (rsp: £3/265g).

The decision to launch into freezers followed demand from consumers already buying the brand’s unbaked pies from its six restaurants, said founder Martin Dewey, adding it was a “perfect next step” for the business.

“We want to bring something new, that tastes amazing, to the freezer and give consumers the opportunity to share a proper ‘pie moment’ at home. For the first time, people will be able to bake a restaurant-quality pie fresh from frozen in the comfort of their own home.”

Created to the same recipe as its restaurant stablemates, the trio is made with natural ingredients and contains no additives or hydrogenated fats.

Square Pie, founded in 2001 at Old Spitalfields Market in London’s East End, currently operates five restaurants across the capital and one in Kent. It launched its branded range of four classic pies and five mini-pies into supermarkets last year and is stocked in Tesco and Ocado.