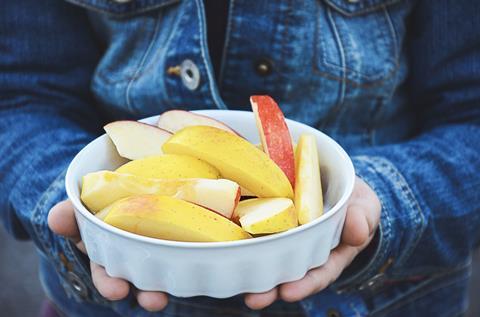 Other flavours could include vanilla, toffee, blackcurrant and cinnamon

Bubblegum-flavoured apples could be on their way to UK supermarkets as part of a push to tempt children to up their fruit & veg intake.

The coating is an evolution of technology already in use in the US to prolong the lifespan of pre-cut fruit and veg, which uses a range of vitamins and minerals to extend shelf life by up to 21 days.

NatureSeal also allowed suppliers to infuse slices of fruit such as apples with a variety of flavours including raspberry, elderflower, cinnamon, vanilla, caramel and bubblegum, without compromising colour or crispness, Agricoat said.

The product could be used for snack packs in retail and foodservice, said the supplier, which was “speaking to UK food companies” about introducing the technology.

Read more: Can the UK grow its own exotic fruits?

“NatureSeal is designed to inhibit browning in select fruits and vegetables while maintaining the texture,” said a spokesman for the brand. “Flavoured apples encourage children to consume fruit while enjoying a flavour of their choice. We aim to create a unique product which will add variety and choice to healthy eating decisions.”

It comes as just 18% of children aged five to 15 ate five standard portions of fruit and veg per day [PHE 2017]. Meanwhile, English Apples & Pears this week launched a campaign urging consumers to act on the adage of ‘an apple a day’.

A consumer study commissioned by EAP last month found 66% of men and 58% of women’s recommended daily calorie intake was made up of “processed, unhealthy” snacks.

“With retailer support, we are confident we can persuade more people to choose apples as their healthy snack and ultimately improve the health of the nation,” said executive chair of EAP Ali Capper.

“Our research has shown that over half of British shoppers (53%) buy British apples and with better, more visible displays in store 37% of those shoppers would buy even more.”