Cold weather causes shortage of carrots in the UK 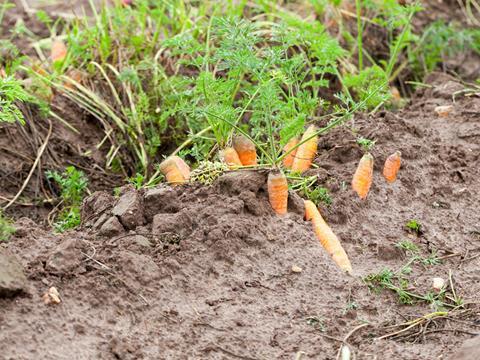 Carrot growers in the UK are struggling to meet demand as the cost of the Beast From The East continues to stack up.

Production in the UK was severely hampered earlier this year after heavy rainfall caused water tables to rise in key growing regions Lancashire and East Anglia, according to the British Carrot Growers Association.

This resulted in waterlogged fields, which reduced the quality of some produce to below saleable levels.

Similar poor weather has also affected growers in Germany, France and Spain. Spanish importers have even looked to source from the UK, according to Nader Shobaki, director of Berkshire wholesaler Global Fruit & Veg.

“We don’t usually export a lot of carrots at this time of year, but we’re getting a lot of requests from Spain that we just can’t fill,” Shobaki adds.

Shortages have sent UK wholesale carrot prices soaring by 20p per kg to an average of 52p per kg since late February [Defra]. Year-on-year prices are up by more than 50% [Mintec].

But these hikes are unlikely to affect pricing in the mults in the short term, as the majority of stock is produced for a set price on long-term contracts, says the BCGA.

The new season UK crop has been delayed by two to three weeks due the late spring, and is now forecast to begin in late June. However, recent warm conditions should benefit the final growth stages of the crop.

“We’re now feeling the effects of a prolonged dry spell and have begun irrigating,” says one Lincolnshire grower, while a slightly earlier Polish harvest could also help to ease shortages.

“Growers with surplus should still be able to sell at inflated prices on the export market,” he says. “But those will be few and far between because so many struggled to plant early crops in February and March.”