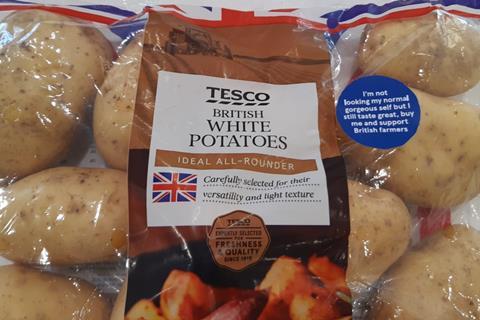 Tesco is to sell potatoes originally destined for foodservice at a lower price point than standard spuds during the coronavirus crisis.

The supermarket has teamed up with potato supplier Branston, which is working with its grower base to redirect to the retailer produce that would otherwise be wasted due to the shutdown of restaurants and fast-casual eating outlets.

Some of the rehomed potatoes will be included in Tesco’s existing white and baking potato 2.5kg packs, while “cosmetically challenged” spuds will be in a ‘Perfectly Imperfect’ bag (rsp: £1/2.5kg) – some 29p cheaper than the packs of regular white potatoes - and will become available in the next two weeks.

All three SKUs will carry a sticker stating ”I’m not looking my normal gorgeous self but I still taste great, buy me and support British farmers”.

“Taking these surplus potatoes not only helps meet the extra demand at the moment but also supports growers at a time when many are facing a real struggle to keep their businesses going,” said Tesco potato buying manager Ben Rowbotham.

The varieties were mainly used for making chips, he added. “So, while they might not look as cosmetically perfect as others, they will still be delicious and excellent for pan frying, sautéing, making potato wedges and other dishes.”

Tesco said it had seen an average 20% rise in demand for potatoes across its stores since the coronavirus crisis began in March.

It comes as Branston’s parent company Branstons Holdings’ saw sales jump by 14% to £152.5m during the year to 28 July 2019, despite volumes falling 9%, according to its latest accounts.

Higher raw material costs following a challenging 2018 growing season caused by the Beast from the East were passed onto consumers, which saw pre-tax profits remain broadly flat at £4.7m.