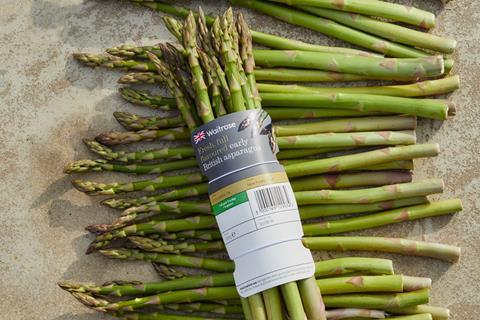 Waitrose is stocking its earliest ever crop of British asparagus, eight weeks ahead of the usual season, with the vegetable wrapped in eco-friendly packaging.

The traditional spring vegetable was grown in the New Forest in Hampshire earlier than normal thanks to an unusually mild winter and advanced farming techniques.

Waitrose claimed it was the first UK supermarket to have British asparagus on its shelves this year.

The limited-edition early season British asparagus will be held together with a simple card wrap rather than plastic trays. The retailer said it signified a return to more traditional packaging.

Alongside a reduction in plastic packaging across all lines of asparagus, the move will save eight tonnes of plastic this year.

It is part of the push by Waitrose to reduce unnecessary plastic packaging, with a target for all its own-brand packaging to be widely recycled, reusable or home compostable by 2023.

“With the help of the mild winter and new growing techniques we have seen our British asparagus spears shoot up ready to be enjoyed earlier than ever before,” said vegetable buyer Lucy Broughton.

“For us, the first British asparagus marks the start of spring and we are excited to be able to offer them to our customers first.”

Grown specially for Waitrose in the south of England, Gijnlim is a very early variety of asparagus. And with the increased light levels and warmer temperatures naturally found in the south coast, the growing season starts earlier thanks to advanced farming techniques.

The asparagus are grown in French tunnels, with fleece tunnels over each bed to keep in the warmth. The substrate is also covered on the sides with black ground cover and a very thin black membrane to protect the spears from the cold while also capturing and retaining the heat from the winter sunshine. The substrate warms up quicker than soil to enable the earlier production.

The early crop will be available in selected Waitrose shops after successfully weathering Storm Ciara and Dennis in recent weeks.