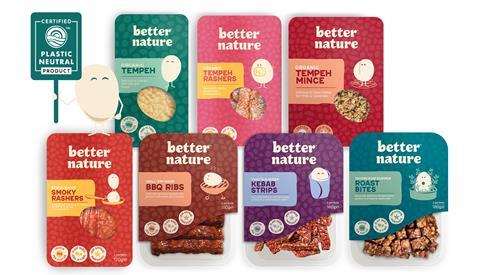 Plant-based start-up Better Nature has raised almost £1.6m in a crowdfunding round as it prepares to hit the mainstream with listings in the major supermarkets.

The meat-free brand launched in 2020 and specialises in products using tempeh, a fermented plant-based protein source typically made from soyabeans.

It hit a £1.35m target on the Seedrs platform within three hours of a private launch. Since going public this week, the pitch has now raised £1.58m and will overfund up to £1.6m.

Better Nature is giving away 22.4% equity in the round, valuing the business at £5.5m.

It plans to use the money to help launch into major supermarkets, with a nationwide marketing campaign, while continuing to support NPD, starting with an extension to its meat alternatives range in June.

The brand is also planning to expand into adjacent product categories such as plant-based dairy, using its proprietary all-natural protein powder.

Co-founder Christopher Kong said there was “huge demand” for nutritious and delicious foods that “don’t compromise on people, the planet or animals”.

“We are perfectly positioned to supply this,” he added.

“We are so grateful for everyone who has invested so far and can’t wait to bring this growing community with us on the next stage of our journey to getting our naturally delicious meat-free products into the mainstream.”

Better Nature, which was founded in 2018 and also raised £430k of seed funding in March last year, partnered with Mindful Chef earlier this month on plant-based options for the recipe kit business.

The brand, which has grown sales 14-fold in 2020, is also available on Amazon and The VeganKind online supermarket and independents nationwide, as well as with foodservice distributor Bidfood.

Investor demand for plant-based brands has soared as consumers flock to the category, particularly as meat eaters look for ways to reduce consumption.

Allplants and This both raised £4.5m with Seedrs last year, alongside more than £1m for vegan snacks producer Livia’s and £910k for dairy-free brand Mighty Pea.