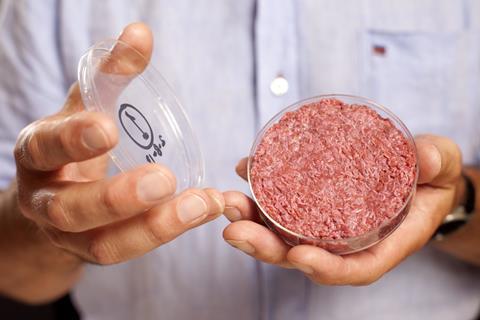 The listed group set out to sell £50m worth of shares in a placing but ended up raising proceeds of £62.5m thanks to high demand.

Agronomics, headquartered in the Isle of Man, invests in lab grown meat start-ups and has established a portfolio of more than a dozen companies in the rapidly advancing sector – including the likes of Livekindly, Mosa Meat, Meatable and VitroLabs.

The firm plans to use the new funds to finance further investment into its current portfolio companies and projects, as well as seeking new opportunities within the cultivated meat sector.

Agronomics also announced this morning that it had Agronomics invested another €196k (£169k) in existing portfolio company Meatable. It now holds a 5.8% stake in the Dutch lab-grown meat startup.

Non-executive chairman Richard Reed said: “Agronomics has expanded rapidly over the past two years, and this financing will further accelerate its growth.

“We anticipate it will provide the full funding to support our existing portfolio companies through their next financing rounds, while also giving us sufficient capital to pursue acquisitions of new investments in this exciting field as it enters into what we expect will be a multi-decade growth phase.”

Despite a recovery yesterday, the FTSE 100 has tumbled below 7,000pts once again this morning as the fears around inflation continues to haunt markets. London’s leading shares fell 1.3% to 6,913.86pts first thing.

It is a very quiet morning on the markets for food and drink updates.

The FTSE 100 made a decent recovery yesterday to claw back 0.9% of losses to get its nose back abover 7,000pts.

Diageo made a strong contribution to London’s blue-chip index after it announced it would restart a return of capital programme of up to £4.5bn to shareholders after strong recovery in its markets around the world The shares ended the day 3.4% higher at 3,298.5p.

Catering giant Compass Group didn’t fare quite as well, with shares down 0.6% to 1,519p as sales and profits continued to be heavily impacted by Covid restrictions in the first half of its financial year.

Just Eat Takeaway also logged heavy falls following news that Delivery Hero was relaunching in Germany, where Just Eat has mostly had the market to itself for years. Its shares slumped 7.9% to 6,276p.

Marston’s investors reacted with a shrug to news the pub group had appointed CFO Andrew Andrea to replace outgoing boss Ralph Findlay in October. The stock fell 0.4% to 96.6p.

THG also fell back 5.9% to 627.5p as investors took profits from a big rise earlier in the week on the back of the SoftBank deal.

In Europe, Ahold Delhaize surged 3.2% to €23.58 to a strong showing in Q1 of 2021 as sales remained elevated above pre-pandemic levels.