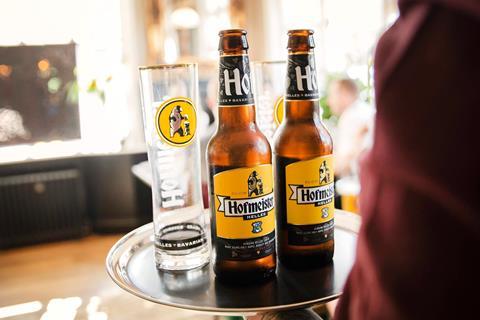 Hofmeister ‘already has such strong brand awareness and affection’

Hofmeister has raked in £350k from private investors to fund its expansion.

The iconic beer brand, which was brought back from the dead as an upmarket Bavarian pilsner in 2016 after being off the market for 13 years, plans to use the funds to grow its sales team and invest in digital marketing to raise awareness of its new ownership and the providence of the drink, its CEO Spencer Chambers told The Grocer.

Investors included former MD of pub group Ei Kim Francis and former Greene King brands and pubs MD Euan Venters, whose investments accounted for “tens and thousands of pounds each of the overall sum raised”, said Chambers. Francis and Ventners have both joined Hofmeister’s board of directors.

They would “be taking an active role in helping to develop it, with Venters focused on building Hofmeister’s brand credentials, whilst Francis lends his expertise to how it targets and grows its distribution”, according to the brand.

It comes as Hofmeister plans to expand its range of brews next month with the addition of Hofmeister Weisse, a 5.1% abv Bavarian wheat beer, and Hofmeister Ultra Low, a 0.5% abv Bavarian Helles lager, with an eye to launching into “the best premium outlets in the country”.

The majority of the brand’s sales have come from the on-trade: grocery sales of Hofmeister in the off-trade rose £2,423 to £11.4k this year [Nielsen 52 w/e 5 September 2020]. It is currently sold through Ocado, Amazon and independents.

New product ranges were being developed “with off-trade in mind” such as new 12-packs which will hit Ocado next year, as well as mini kegs, said Chambers.