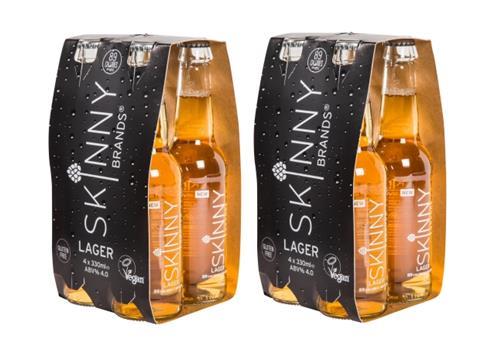 Two ‘skinny’ alcohol brands are looking to raise expansion capital to cash in on growing demand for healthier booze alternatives.

Better-for-you beer and cider producer SkinnyBrands is seeking £400k via the Seedrs crowdfunding platform to grow in the UK and internationally.

The producer of full-strength, but lower-calorie Skinny Lager and Skinny Cider is offering a 3.8% stake, valuing the three-year-old business at just over £10m.

Already listed in Tesco, Morrisons and Ocado with annual revenues projected to be £1.4m in the current year, the founders are seeking cash to employ country managers to oversee export growth to Australia and the US while boosting its on-trade presence in the UK, particularly in London.

To date it has secured £1.7m through a network of private investors and has currently raised £263k via its crowdfunding campaign at the time of going to press.

Separately, the company behind Skinny Champagne and Skinny Prosecco is seeking £300k from crowdfunders via Crowdcube to build the brand globally and grow its operation in the UK.

Thomson & Scott, which forecasts revenue of £1.3m in the current financial year, is offering 3.6% of the business, valued at £8m.

The lower-sugar products, which also champion their vegan and organic credentials, are currently stocked at Ocado, Planet Organic and Selfridges and  and sold into the US, South Africa, New Zealand and South America.

The brand has also recently launched a US website, secured listings in John Lewis and is in talks with Waitrose.Funds will be used to build its team, create a marketing strategy and grow its UK direct to consumer offer.

Backers include former Camden Brewery partner Patrik Franzen who sold the brewer to AB InBev for around £85m in December 2015.

The campaign had raised £178k at the time of going to press.