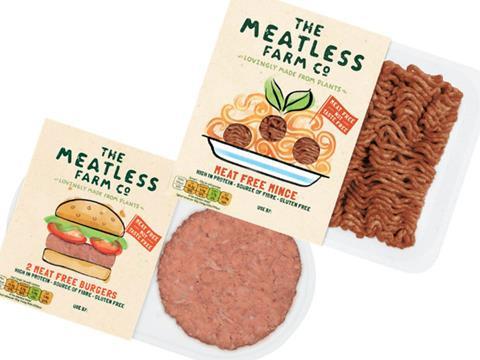 Its first two products are vegan-friendly and gluten-free

Meat alternative startup The Meatless Farm Co has secured its first listings in the mults.

Its first two products are vegan-friendly and claim wheat and gluten-free credentials in a bid to cater for the growing free from market.

The Meatless Farm Co’s mince and burgers are manufactured in Nottingham, and become the brand’s first products to hit the market since the company was formed in 2015.

The range was developed based on insight women and under-25s were driving demand in the meat-free category, with the brand aiming to offer an everday product that stands out from the competition and take a slice of the meat substitute market set to be worth £3.9bn globally by 2020 [Allied Market Research, 2018], the brand said.

The products’ protein content rivalled meat, it claimed, while the price points could compete with traditional proteins, with its mince coming in 5p more per 100g than Sainsbury’s 5% fat beef mince, which retails at £3.50/500g.

It follows the launch last weekend of a veggie quarter pounder by Dutch vegan brand Vivera, which it claimed was the “best vegan alternative” to an Aberdeen Angus burger currently available.

“We are entering the market when demand is growing and meat-free alternatives are becoming increasingly mainstream,” said Meatless Farm Co founder Morten Toft Bech. “We champion texture and taste, offering an everyday solution for the UK’s 22 million flexitarians wanting to still enjoy family favourite dishes but just eat a little less meat, … alongside catering for vegetarians and vegans who are looking for tasty alternatives.”