Veganuary launches 2019 campaign with call to MPs to go vegan 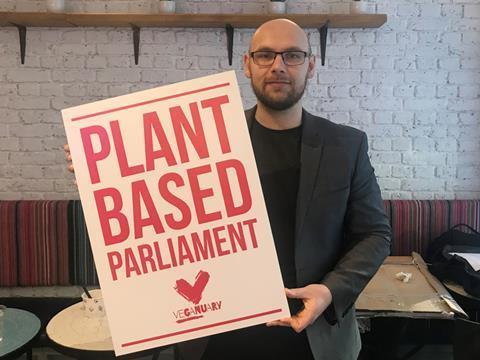 Vegan charity Veganuary is set to launch its 2019 campaign this afternoon (4 December) with a call on parliamentarians to take on its 31-day commitment to ditch animal products from their diets.

The charity said it hoped the move would prompt government to discuss policies promoting plant-based eating as part of its strategy on climate change.

It comes after climate minister Claire Perry told the BBC in October it was not the government’s job to advise the public to cut meat intake, and follows an Intergovernmental Panel on Climate Change report warning of drastic environmental consequences to continued meat consumption at current levels.

“In an age where we have a sugar levy to encourage people to eat healthily, why shouldn’t we be promoting plant-based diets to improve health and tackle climate change?” said Veganuary CEO Simon Winch.

The charity expected initial support from three to four MPs, said Winch. It will also unveil the first phase of its marketing activity this evening, targeting London commuter hubs with a “guerrilla” campaign calling on prime minister Theresa May to ditch meat for a month.

“Switching to vegan alternatives in the cafeterias of parliament would be a simple step to take for our leaders to lead by example,” added head of campaigns Rich Hardy.

Ahead of the fifth year of the campaign, the charity has set a “conservative” estimate of 300,000 worldwide sign-ups for 2019. According to Ipsos Mori, a ‘Veganuary effect’ sees around 10 times the number that signed up attempt a vegan diet. Just shy of 169,000 took on the challenge in 2017, 78,000 of whom were British. Of those that figure, about 60% remained vegan, said corporate outreach manager Zoe West.

WH Smith would display the Veganuary logo to make it easier for newcomers to the diet to find suitable products, added West. Almost all the major mults will be stocking products featuring the logo, with the likes of Unilever set to take advantage following the launch of its Hellmann’s vegan mayo and dairy-free Magnums.

“Convenience is key to make it easy for people to transition,” said West. “So we’ve been speaking with own label food-to-go specialists Bakkavor, Greencore and Samworth Brothers, who are expecting a surge in demand for their vegan options come January.”

Meanwhile, the charity has also partnered with the National Association of Health Food Stores to ensure participants have access to specialist food stores and are able to maintain nutrition through the transition. A host of brands including Quorn, Tofurky, Fry’s, Oumph, The Meatless Farm Co and Canadian meat alternative brand Gardein have become official supporters of the campaign.