Acrylamide: why the UK must take urgent regulatory action 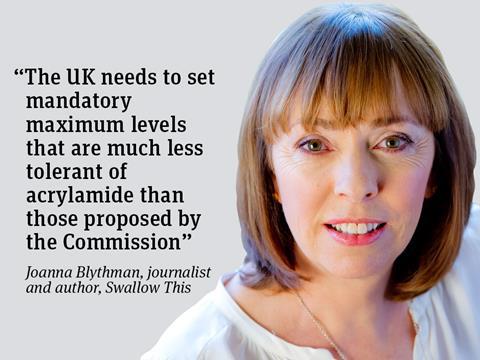 One obvious way to reduce cancer rates would be to limit our exposure to acrylamide. EFSA has said this chemical compound, which forms during high-temperature frying, roasting and baking, increases the risk of cancer.

In 2013, researchers in a European acrylamide monitoring project, known in UK as the Born in Bradford study, found British babies had the highest levels of acrylamide in their bloodstream of all the five European places studied, almost twice the level of Danish babies. They pinpointed chips and crisps as the largest source of acrylamide in the diet of Bradford’s mums-to-be. Their study showed that women who ate foods high in acrylamide during pregnancy were more likely to produce babies with lower birth weights and smaller heads.

The EC’s new draft proposal on this toxic contaminant as currently framed won’t reduce its presence in food. Indeed, it may actually prevent initiatives by individual EU member states from limiting exposure. Instead of setting mandatory maximum levels of acrylamide, the Commission has settled for non-binding ‘indicative values’ that are much more generous than those proposed by health-aware Germany and Denmark.

This worse-than-useless draft regulation is based on existing codes of practice developed by food industry lobby groups, such as FoodDrinkEurope, Serving Europe and the International Association of Plant Bakers.

Presumably, if we in the UK want to continue to sell our food products in Europe after Brexit, those products will have to meet the EU standard. But given that we Brits have a graver acrylamide problem than other European countries, it’s abundantly clear that we need to take even stronger action and set mandatory maximum levels that are much less tolerant of acrylamide than those proposed by the Commission.

There’s a precedent here. The Danish government has already lowered its limits because, in the words of its food and environment minister, Eva Kjer Hansen: “Indicative EU limits do not protect Danish consumers well enough”. Here’s hoping someone in Westminster has an effective acrylamide reduction plan that puts the health of British citizens before industry convenience.