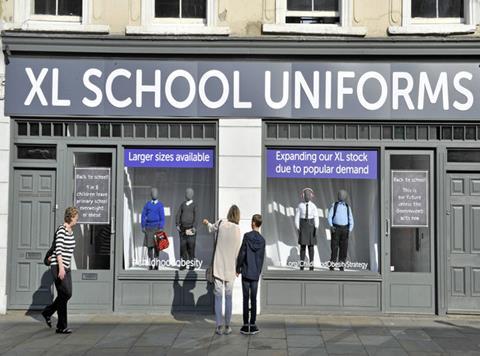 Cancer Research UK has launched a campaign to attack the government’s Childhood Obesity Plan, claiming it is far too weak to tackle the looming health crisis in schools.

With 57,100 children who start primary school in England at a healthy weight ending up obese or overweight by the time they leave, according to figures published by the charity today, it accused ministers of “reneging on their promises.”

“Young waistlines have been expanding steadily over the last two decades. With so many overweight and obese children in England, we are seeing a greater need for larger school uniforms. And it’s a shame the government has missed an opportunity to save lives. The government has failed children,” said Alison Cox, Cancer Research UK’s director of prevention.

She argued that encouraging exercise and a sugar tax, the two main measures announced by the plan, would not curb the rise of ill health that could cost the NHS billions.

The charity called for commitments to protect children from junk food marketing and mandatory targets to reduce the amount of fat, sugar and salt in food.

“More than 57,000 children will become overweight or obese during primary school each year in England, and the government had a chance to prevent this,” said Cox.

“The Childhood Obesity Plan is simply not up to the task of tackling children’s obesity. Instead, the next generation faces a future of ill health, shortened lives, and an overstretched NHS.”