Find strength in working together 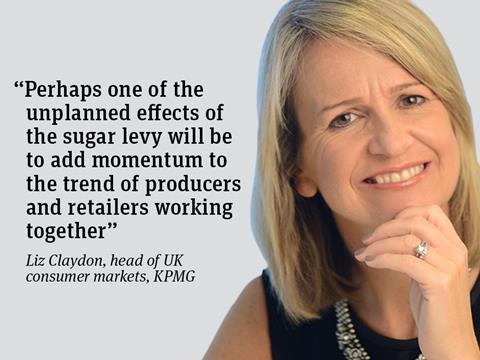 The grocers may be glad that summer has finally appeared, bringing a boost to sales. Some lines were up as much as 40%, as consumers reached for sun cream, ice cream and meat for the barbeque.

Indeed, fears of a general drop in consumer confidence post the referendum appear to have been overstated, for the time being at least. The British Retail Consortium and KPMG’s Retail Sales Monitor revealed strong performance for July, with growth up 1.9 per cent from the same period last year.

But this positive picture has been somewhat tempered by the recent announcement of the government’s childhood obesity plan. Broadly speaking, the guidance appears to support the food industry at a time of wider economic uncertainty, and does not include the restrictions on in-store promotions and advertising called for by many. However, it leads with a soft drinks industry levy which will have an impact on producers and importers alike.

The levy has its critics from both sides of the debate, while the industry itself is unsurprisingly not keen. Only time will tell exactly how it will affect soft drinks producers, and how they will respond - but sales and product development will be areas to watch. In fact reformulation is one of the changes the government appears to be striving for, with research and development support under way and referenced in the action plan.

Perhaps one of the unplanned effects of this policy will be to add momentum to the trend of producers and retailers working together, as they attempt to minimise the impact on sales and margin in key categories. A number of my clients are placing an increased focus on strengthening supplier-grocer relationships, which I believe will also help them navigate the delicate interplay between branded and own-brand products.

However the soft drinks levy plays out, producers and retailers will be keeping a close eye on what else may be coming their way. Following strong intervention in the tobacco and alcohol industries, the driver of obesity is likely to mean that this first policy step is only the beginning of a long journey for the food and drink sector.