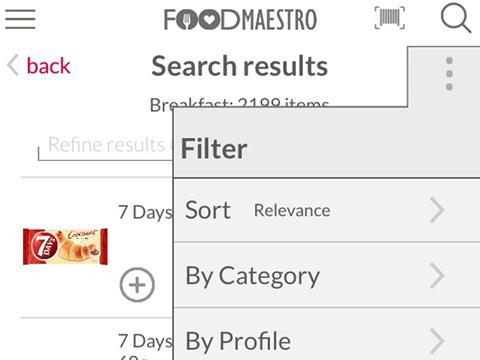 A paid-for rival to Public Health England’s free sugar app claims to offer consumers a much more sophisticated way of cutting down their consumption.

The FoodMaestro app, originally launched in July last year as a way to allow smartphone users with food allergies to avoid danger foods, has been updated to include information on sugar levels across more than 75,000 products.

As well as allowing consumers to scan barcodes in store, the app features an advanced search function to enable shoppers to search by category. As well as showing the sugar content of different products, the app also recommends lower-sugar alternatives in the same sector.

The app uses data gathered by the company and shared with manufacturers for approval. It was developed by Dr Lauri-Ann Van der Poel, a paediatrician at London’s St Thomas’ Hospital. Unlike the PHE app, which uses sugar cube symbols, it uses spoon symbols, each representing 4g of sugar.

PHE’s Change4Life Sugar Smart barcode scanner shot to the top of the iTunes free chart when it launched, with more than 700,000 plus downloads, although it has attracted controversy over the inaccuracy of some of its data

“As far as FoodMaestro is concerned the more of these types of apps the better,” said a spokesman for the company. “We’re very pleased PHE launched its app, but the technology we use is more sophisticated and we think it is more useful for consumers looking for information about what sort of products they should be switching to,” said a spokesman.

The app is available to download on IOS and Android for an annual fee of £2.29