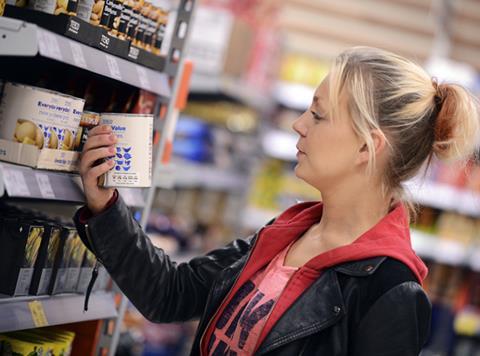 A shopper checks the labelling before deciding to buy

Many products currently branded as high in fat, sugar and salt content could be relabelled as healthier for consumers under a breakaway industry plan to take into account portion sizes.

Six of the world’s biggest food and drink companies have unveiled their initial plans to change the UK’s traffic lights/GDA hybrid system on front of pack.

Under the draft proposals, the model used by retailers and suppliers to colour-code fat, salt and sugar content would stretch the bands for amber and green to reflect suggested portion sizes.

Products such as olive spreads, hard cheese and some types of bread would see red warnings disappear to be replaced by amber, while others would switch from amber to green.

The taskforce, set up by Coca-Cola, Mars, Mondelez, Nestlé, PepsiCo and Unilever, has come up with suggested calculations it says allows the system to factor in the portion sizes of products.

It has discussed different options for the proposed changes to the system. These include one model that would only take into account smaller portion sizes if it changed the colour of the label from red to amber, and keeping the current stricter criteria for a green label.

“We think that the current UK GDA Model should allow more ‘space’ for smaller portions, taking into account the actual contribution to the diet of consumption,” says the draft proposals discussed at the taskforce’s first meeting at end of last month.

It says the changes would provide companies with an incentive to reformulate products but also to switch to reduced portion sizes.

Separately, the companies are also pushing for countries across Europe to adopt a traffic lights hybrid approach, similar to that already adopted in the UK and now being proposed in several other European countries, including France and Portugal.

However, campaigners have warned the move by food and drink companies risks damaging the credibility of the UK’s front-of-pack labelling scheme and have instead urged the next government to make the current system mandatory.

“There may be some merits at looking into how the scheme could reflect portion sizes but I am concerned about this being drawn up by companies rather than an independent arbiter,” said Children’s Food Campaign director Malcolm Clark.

“The current system took many years to draw up and I would much rather the government made it mandatory for companies to sign up rather than big companies drawing up breakaway plans. If there are merits to changing it to reflect portion sizes that could be looked at by Public Health England.”