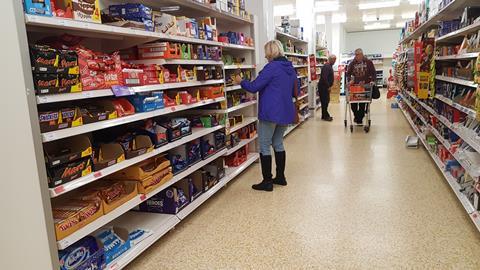 Is it time for a new approach to the obesity challenge?

The industry has undermined its own efforts to reduce portion sizes and encourage healthier choices.”

Based on 2019 nutritional and sales data, the report echoes PHE’s warning in September that food and drink has almost no chance of hitting its target of 20% less sugar by 2020. “Despite the best efforts of many in the industry to reduce sugar, progress is a long way off the mark,” it says.

So, what exactly does IRI’s data show? And what are its recommendations for industry?

The unintended consequences of portion control across confectionery are one of the biggest causes for concern highlighted by IRI’s report.

Most suppliers have chosen to eschew reformulation in favour of smaller packs with no corresponding reduction in price. But IRI warns this is counterproductive, driving consumers “to choose bulk packs in a quest for better value. The industry must stop swapping one problem for another.”

Indeed, the average size of confectionery packs sold in grocery has increased 2.5% over the past year, IRI’s data shows. Volume sales of sharing bags have grown 4.6%, while multipacks are up 5.6%. Singles, on the other hand, are down 7.9%.

The removal of confectionery singles from tills to curb impulse buys is having a similar impact, IRI suggests. Because shoppers looking for a sweet treat are forced into the confectionary aisles, where they are faced with better value sharing bags and bars.

Unfortunately, this proves shopper behaviour is “the one variable that no one can really control” says Dan Finke, IRI general manager. “You don’t know what consumers are going to do as the result of changes.”

Elsewhere, while suppliers are adding healthier variants, IRI’s nutritional data shows there has been “no real change” to the product mix in the 10 categories targeted for sugar reduction. High sugar makes up 59% of lines in-store, while medium is 35% and low just 6%.

On a category-by-category level, “breakfast cereals and yoghurts have successfully reformulated products, and are on track to reach the 20% reduction target by 2020”, IRI notes, but the industry has seen “no progress at all” in the arguably more significant markets of chocolate and sweet biscuits.

So, while some huge strides are being made across the industry, according to IRI, overall efforts are not progressing “at either the pace or the level we would hope. Effecting real, widespread change requires a new approach.”

What would that be? There is the oft-mooted likelihood of an extension to the sugar tax, which IRI calculates has so far removed 53,000 tonnes of sugar from soft drinks - 23,000 more than reported by PHE. But there have been untended consequences: some suppliers have increased salt content to maintain flavour profile and texture.

And there’s also the danger that sugar reduction efforts could “have a minimal effect on childhood obesity” because consumers could pivot to “more calorie-dense food from other categories” IRI warns. In fact, the total calorie content across all food and drink has increased by 0.8% over the past year, driven by a 1.3% rise in satfat.

Nevertheless, the opportunity remains for suppliers to learn from each other’s efforts, says Finke. “The one thing I think manufacturers and retailers will increasingly do is use cross-category insight to understand who’s really winning, who’s making the right calls on formulation, product size and assortment mix.” They may not be able to control shopper behaviour, but they can track it to “drive better decisions about what to do next”, he suggests.

In other words, if the industry wants to beat obesity, it has to first embrace big data.