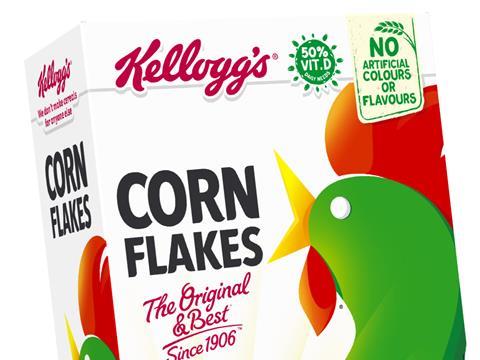 Kellogg’s has doubled the vitamin D in its cereal from 25% RDA per 30g serving to 50% “to help tackle the chronic low levels of this essential vitamin in the diet of the nation”.

The move, part of the company’s Better Starts healthier eating initiative, came in response to one in five people in the UK being deficient in vitamin D, according to Kellogg’s. One of the reasons was a change in diet that meant Brits were no longer eating food rich in the vitamin, such as pilchards and offal.

The result of 18 months’ development, the Kellogg’s is to roll out cereals with extra lanolin cooked into the flakes to make them richer in vitamin D3. No other ingredients have changed.

Rollout of the revamped products will begin this month with original Coco Pops, Frosties, Corn Flakes, original Rice Krispies, Crunchy Nut Corn Flakes and original Special K, before continuing throughout the year across the the Kellogg’s portfolio of children’s and family cereals.

The supplier first fortified its products with vitamin D in 2011, offering 25% of recommended daily intake per serving. Doubling the content – in light of government concerns about vitamin D deficiency – gave Kellogg’s “the highest fortification level across the cereal category” it claimed.

This is the latest step in the cereal giant’s Better Starts reformulation programme unveiled in late 2017 to “help British families make healthier choices in the morning”. It began by cutting sugar in bestselling lines including Coco Pops – and the axing of sugary Ricicles after 62 years.

“We have a long history of fortification” said Laura Street, senior nutrition manager at Kellogg’s. “We have a large public reach, and we feel as a big food provider it’s our responsibility to look after the public.”

Kellogg’s was the first added vitamins and minerals to its foods 1938. In the 1970s, it added folic acid to cereal to help combat neural tube defects in newborn babies.