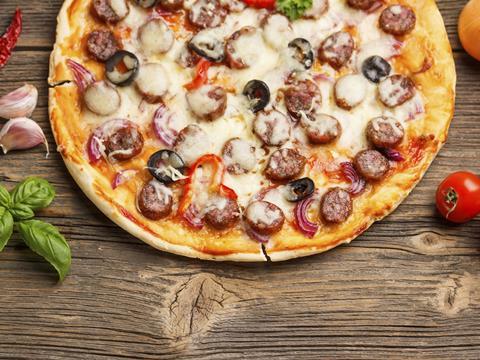 Products hit by the proposals include pizzas, ready meals, sandwiches and crisps

Tens of thousands of supermarket SKUs will have to shrink or be reformulated, under a new crackdown on calories launched by government health experts today.

In the latest and by far the most wide-reaching yet stage of Public Health England’s (PHE) voluntary reformulation programme, the industry has been told it needs to cut calories from a raft of categories by 20% by 2024.

Products hit by the proposals include pizzas, ready meals, sandwiches and crisps.

PHE has given manufacturers and retailers the choice of reformulating or slashing portion sizes of products, which also include all cooking and table sauces, sausages and frozen chips, as well as a huge range of other products said to be contributing to the obesity crisis.

The body has decided to target the same proportion of cut in calories as it did for 10 other sectors that were subject to targets set last year because of their impact on sugar intake. Those sectors, such as confectionery, will be exempt from the new targets.

The FDF welcomed the proposals. It said they showed government health experts had ditched the approach of targeting individual nutrients like sugar and were now firmly back to focusing on all-round calorie reduction - as did the now-defunct Responsibility Deal.

However, the targets, which will be formally set across all the deficient categories of food affected next year, will pose a massive reformulation challenge for the industry. They will also require the public to accept the shrinking of a huge range of their favourite products, also including ketchup, dips, sausage rolls and pasties.

Today’s programme was unveiled alongside new evidence claiming overweight or obese boys and girls consume up to 500 and 290 calories too much each day respectively.

PHE claimed that if the industry calorie reduction target was met, it could prevent more than 35,000 premature deaths and save the NHS £9bn over a 25-year period.

It plans to publish guidelines in mid-2019, after holding what promise to be hard-fought negotiations with retailers, suppliers and the out-of-home sector. The reductions will be judged on a baseline from August 2017 consumption figures.

PHE is considering launching a specific programme to ensure out-of-home operators take part in the programme, amid widespread criticism at the lack of uptake on previous moves on sugar and concern over the lack of measurement of smaller takeaways and chicken shops, compared with bigger retailers.

Last year, The Grocer revealed health experts had met a “wall of silence” in efforts to get OOH operators to sign up to reformulation. They admitted two different systems may be necessary.

It suggested the OOH system would be based on overall menu calorie content rather than individual ingredients.

However, PHE claimed it had received widespread support from retailers, manufacturers and the OOH sector in initial talks to discuss the programme, though it admitted business had already raised fears over the huge cost of the proposals and the potential financial impact to their businesses.

Some companies also claimed that reformulation had already “reached the boundaries of what was possible”.

PHE also admitted that when it came to the thorny issue of cutting portion sizes, it would have to be careful not to reach a “tipping point” where consumers ate two products instead of one.

“It’s hard for people to make healthy food choices, whether for themselves or their families. That’s why we are challenging the food industry to take 20% of the calories out of everyday foods, building on their good work on salt and promising announcements on sugar,” said PHE chief nutritionist Dr Alison Tedstone.

FDF director general Ian Wright said: “We warmly welcome the government outlining its calorie reduction ambitions in today’s report. FDF has long advocated an approach to tackling obesity, which looks beyond individual nutrients and instead primarily focuses on calories.

“It’s encouraging too to see that the government’s renewed focus looks not just at the food and drink bought for consumption at home, but also at takeaways, restaurants and cafés. To be successful in improving the nation’s health, it is also vital that this work delivers appropriate, clear and easily understandable calorie messages for shoppers and consumers.

“FDF and its members take their responsibility in tackling obesity seriously. For the last decade, the UK’s food and drink companies have been reformulating their products to reduce sugar, calories, fat and salt, as well as limiting portion sizes. In fact, over the last five years FDF members have reduced calorie content in the average basket by 5.5%*.

“We look forward to working collaboratively with our partners, including Public Health England, to help shape the programme.”

BRC director of food policy Andrew Opie added: “We recognise that more needs to be done to tackle childhood obesity, Retailers have been working on calorie reduction for many years; optimising recipes and providing clear information and choice, such as 100kcals snacks. For the strategy to be effective it needs support from the whole of the industry. The challenge for government, therefore, is ensuring full engagement from all food businesses.”

The latest war on calories comes with the results of the first year of PHE’s sugar reduction programme due to come out in the next few weeks. It is expected to show that some categories are struggling to hit the 20% calorie reduction target for 2020.

Health groups welcomed the latest plans but urged the government to ensure a clampdown on retailers or out-of-home operators who refused to take part.

“We applaud PHE’s plans to reformulate and cut excess calories consumption in what could be a groundbreaking campaign,” said Graham MacGregor, chairman of of Action on Sugar. “However, in order for it to be successful, it is imperative that the 20% calorie reduction targets are properly enforced and transparent. We also need clear guidance from government on what will happen if the food industry fails to comply, as it is vital that the industry is given a level playing field and all companies, both retail and out of home, fully co-operate.”

Caroline Cerny, Obesity Health Alliance lead, said: “The food industry absolutely must play its part in tackling obesity, and through adapting recipes and reducing over-sized portions, can make it much easier for families to make healthier choices. It’s important that government keeps a check on industry to ensure these targets are being met - and if not, takes tough measures to enforce action.”