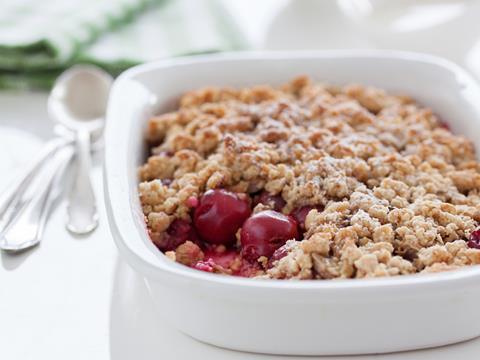 Department of Health experts have been accused of risking confusion after drawing up plans to target products such as fruit crumble, snack bars and yoghurts alongside fizzy drinks and chocolate in the war on sugar.

The Scientific Advisory Committee on Nutrition (SACN) will meet next week to rubberstamp the proposals by Public Health England (PHE), which have set out to identify sugar from processed fruit ingredients, often used as sweeteners.

While giving the all-clear to some products such as tinned vegetable soup and dried fruits, they would list a raft of categories including fruit purées, pies and vegetable juice classified as containing so called ‘free sugars’.

SACN admitted the plans go further than those set out in its bombshell carbohydrates and health report a year ago, which specifically said free sugars from such types of processed fruit and veg would be excluded. The u-turn has upset some companies and experts who claim it will make it even harder for the UK to hit its 5 a day target.

Documents prepared for the meeting reveal PHE considered excluding all sugars in processed fruit from the free sugars definition but decided it was “inappropriate” for products often effectively used as sweeteners.

Instead PHE has chosen a ‘compromise’ figure of including 50% of the sugars in processed veg as free sugars.

One expert respondent described the proposals, which would see the UK go further than the WHO, as “arbitrary”.

“I’m surprised you are proposing deviating away from the SACN definition of free sugars by incorporating the pragmatic 50% approach, especially as SACN’s definition is aligned with the WHO’s as it stands,” they said. “The outcome could be two different definitions for the same term.”

A Scottish government source also questioned why the definitions had been changed from the original SACN report. “It is also unclear as to why processed vegetables would not be treated in the same way as processed fruit.

“Given how far away we are in Scotland from achieving 5% of energy from free sugars, allowing processed fruit (and vegetables) to be excluded from free sugars doesn’t seem too much of a concern to us.”

One academic added: “Although for most people these items are not a major part of the diet, the inclusion will make it even harder to keep below the [sugar reduction] targets.”

However, other industry sources accused SACN of not going far enough. “We were highly surprised with the exclusion of sugars in vegetables, beans and pulses in any form, including vegetable soups or purees. We cannot see any physiological rationale for this. We assume this must be driven not by science but by a desire to encourage more vegetable intake and/or specifically discourage consumption of free sugars in beverage form,” said one.

PHE claimed modelling showed the impact of its proposal would be “small”, suggesting it would add 0.5g/day of free sugar to average intakes.

A spokeswoman for PHE said: “We’ve developed a detailed definition of free sugars so we can effectively estimate population intake in the National Diet and Nutrition Survey. We’ve shared it with industry, government and academics and we’re taking their feedback to SACN for advice on the final definition.”