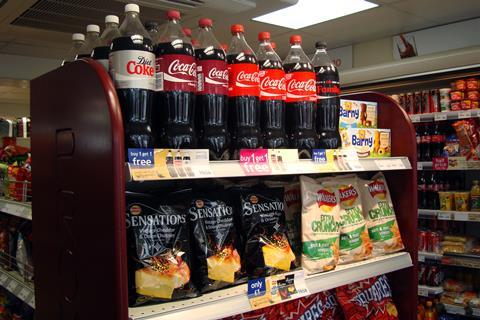 The Scottish government has shelved plans for a clampdown on HFSS promotions, amid fears it would have had a disastrous impact on companies reeling from the coronavirus crisis.

The backtrack, which comes amid calls from industry on both sides of the border for ministers to pause anti-obesity measures because of the economic risk, was announced today and greeted as a major victory by industry leaders.

Scottish public health minister Joe FitzPatrick said the government would be “taking stock” on the impact of the outbreak on the industry, before it pressed ahead with its plans.

But in his statement FitzPatrick said: “We are no longer planning to introduce the Restricting Foods Promotions Bill in this Parliament.

“The Covid-19 pandemic has had a significant impact, including on the food and drink and retail industries and on consumer behaviour. It is not yet clear what its long-term impact will be. It is important we understand this fully and that we assess the economic and equality impacts of our proposed measures post-pandemic.

“Pausing the introduction of the bill provides us with an opportunity to take stock. It enables us to take into account the impact of the Covid-19 lockdown, including on people’s diet and healthy weight. We will be able to consider fully whether a more wide-ranging bill is required to tackle Scotland’s diet and weight problem after the pandemic.”

The minister said tackling obesity remained a “public health priority” and added: “We remain fully committed to restricting the promotion and marketing of foods high in fat, sugar or salt where they are sold to the public and will seek to progress this measure as soon as it is possible to do so.

“Work already underway to further improve the evidence base to underpin the proposals will continue. We will also continue to engage with the other administrations in the UK to explore the scope for the possible alignment of policy and legislation.”

Scotland’s u-turn comes amid great speculation over the Westminster government’s plans for obesity, amid growing pressure from campaigners for similar delayed moves in the UK on HFSS promotions to go ahead, and reports Boris Johnson is planning a clampdown on obesity because of his own Covid-19 experience.

Yesterday, an editorial published in the BMJ by researchers at Queen Mary University of London, claimed that the toll of coronavirus, which has seen more than 40,000 deaths in the UK, was exacerbated by the obesity pandemic.

It followed a report by Public Health England last week that suggested people with obesity were more likely to become victims of the coronavirus outbreak.

Food industry bosses have described this as “deeply offensive” and have also been calling on ministers to shelve any plans because of the economic risk to companies.

“We welcome the announcement that the Scottish government will not bring forward legislation to restrict the promotions of food and drink products,” said David Thomson, CEO of FDF Scotland.

“The Scottish government has listened to FDF Scotland and our members’ concerns that these proposals would have had a devastating economic impact on smaller Scottish food businesses, who sell the majority of their products in Scotland.

“Our food and drink manufacturers are facing increasingly difficult times due to the impact of the coronavirus crisis, as well as the uncertainty around the UK’s future trade deals with the EU and further afield. We call on the Scottish government to continue to work with us to ensure our vital sector is supported to recover and prosper into the future.

“Our members take their role in improving the health of the Scottish people seriously and will continue to play their part. FDF Scotland’s reformulation project manager, funded by the Scottish government, is helping small to medium-sized food companies to make their products healthier.”