Supermarkets 'will never agree' to collective action on HFSS promos 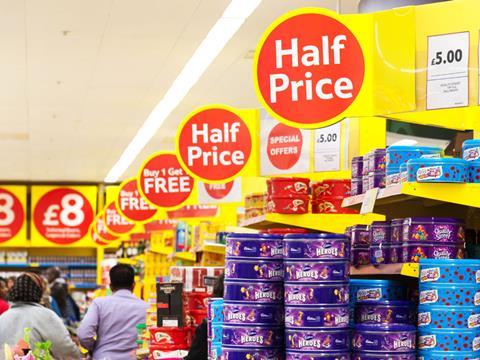 supermarkets have said they will “never” agree to collective action to limit deals on sugary foods, after a promotions clampdown was revealed as Public health England’s number-one plan to cut sugar consumption.

PHE’s evidence review, published this week after a four-month delay, laid much of the blame for the UK’s obesity crisis at the door of retailers for promoting high-sugar foods, naming a war on promotions as its top objective.

It calls on the government to limit promotions of high-sugar foods in supermarkets, convenience stores and the out of home sector, with Kantar’s research showing 40% of food sold was on promotion in supermarkets, and was “heavily weighted” to sugary foods. PHE claims the promotions are causing a 6% addition to sugar consumption and wants ministers to revisit the failed attempts by the Department of Health under the Responsibility Deal to get collective action from supermarkets on HFSS foods.

In 2013, the DH drew up suggested measures, including moves to put “healthy” products in more prominent positions, activity to promote foods to children and vouchers to incentivise healthy eating. But in November last year, when it asked for examples of what supermarkets were doing, it received just four, chiefly the ban on ‘guilt lanes’ by Aldi, Lidl and Tesco.

PHE, whose review Sugar Reduction - The Evidence for Action now sits with health secretary Jeremy Hunt, said tackling promotions ranked highest in a total of eight recommended measures, including a crackdown on marketing of HFSS products to children, reformulation, and a tax on sales of added-sugar drinks.

Andrew Opie, head of food at the BRC, said it was “a complete myth” that supermarkets drove unhealthy choices. “We make no bones about the fact foods high in fat, salt and sugar are promoted… but the price of products such as fresh produce have never in real terms been cheaper,” he said.

“Are they going to say products such as cheese and bacon, which are high in certain ingredients, should be branded as unhealthy and not be allowed to be promoted?

“It’s something that supermarkets are never, ever going to sign up to collectively.”