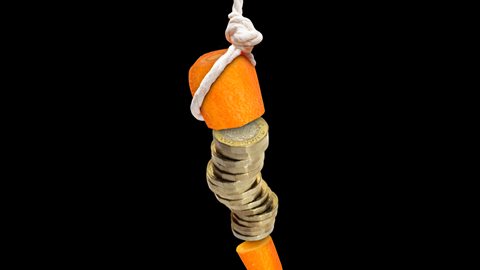 So far, tax has been a stick rather than a carrot in the fight against obesity. But now campaigners are calling for the removal of VAT on healthy products. Could it work?

Two years ago, Chris Holmes stood in a London courtroom facing the mayor, Public Health England and a litany of high-profile charities including Diabetes UK and Cancer Research.

The then-chief development officer at KFC was contesting a hotly debated policy that would see fast food outlets banned from opening within a quarter of a mile of the city’s schools.

“On the other side, it was me and a guy from McDonald’s,” he laughs. “It was like, how has this vegetarian that used to look after weight management at Boots ended up being the guy challenging a policy to open takeaways near schools?”

For Holmes, it was both a turning point in his career (he left his role at KFC a little over a month later) and a microcosm of everything that was flawed in the government’s current approach to tackling obesity across the UK.

“Even the layout of that courtroom was a symbol of everything that was wrong,” he remembers. “On one side, we had these well-intended and well-informed policy makers trying to do all they could, which was wield a big stick, and on the other the people actually running the food environment. They couldn’t have been further apart.”

For Holmes, there had to be a better, more collaborative route. Which is how, in May 2021, he came to launch healthy eating app Smash, offering discounts to young people on healthy products and menu items. The new app was all part of a wider project for Holmes: an action plan that called on governments to swap the stick for the carrot when it comes to tackling poor diets. 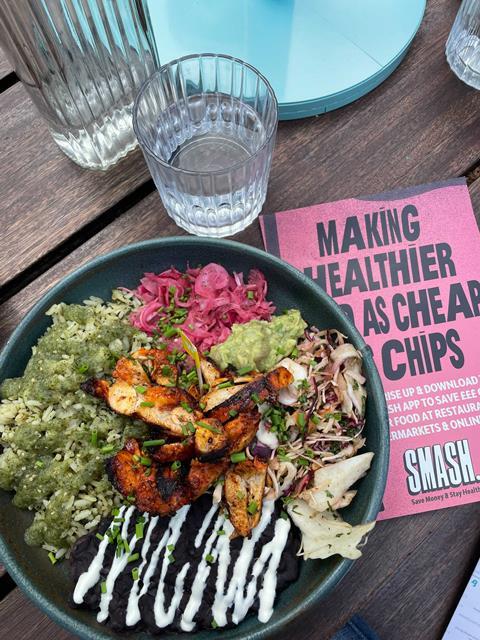 The Smash app, which gives young people discounts on healthy food, launched in May

Already supported by more than 40 food businesses and campaigners, including the likes of Unilever, Wahaca and Ugly Drinks, one of the manifesto’s most compelling calls is for VAT to be removed from healthy products, to make the healthiest choice the cheapest one for consumers.

So, could it work? Given policy has so far centred on the stick – from mandatory targets for HFSS brands to hiking prices and, of course, banning fast food joints – the suggestion by Holmes and his backers would require a brand new approach by policymakers. So would it prove complementary or conflicting to existing measures? And how effective might it be in changing shopping habits anyway?

Using taxation to raise prices, and encourage healthier or more sustainable eating habits, is a tried and tested approach. From the 8% tax slapped on snacks, sweets and nut butters in Mexico, to the hefty 14.5% added to bills from fast food chains in Kerala, India and, of course, the UK’s very own sugar levy on carbonated soft drinks (see p29), the use of tax to bump up cost and incentivise better choices is a well-trodden path.

It fits into a political preference for penalties, rather than incentives, when it comes to affecting change. In much the same vein, the government has set out plans to significantly reduce the opportunities for HFSS brands to market themselves. This includes a ban on online advertising and TV advertising prior to a 9pm watershed, expected to be in place by 2023, alongside tight restrictions on promotions.

“All we’re talking about is banning the bad. You have to promote the good stuff too”

But penalising junk food and raising prices should only be one part of the solution, believes Holmes. “We want to change the narrative,” he says.

“Going back to that courtroom with the London mayor’s team, all we’re talking about is banning the bad. Where’s the conversation around promoting the good? You can’t just attack everything. You have to, at some point, promote the good stuff too.” For him, VAT is “the most obvious route” to achieving that.

His proposal is simple: remove VAT from the products that tick certain criteria on health. A significant amount of food and drink is zero-rated, ie it isn’t required to add on the 20% standard rate of VAT. However, that doesn’t currently apply to alcohol, confectionery, crisps, savoury snacks, hot food, sports drinks, ice cream, soft drinks or mineral water.

Within those categories, that means there are currently no distinctions in VAT between a pack of crisps loaded with salt and artificial flavourings, and a low-salt bag of oven-baked chips using all natural ingredients. Holmes sees that as a problem that could be easily remedied through VAT. It isn’t the first time there’s been a proposal to change the system. In 2017, the founders of UK ice cream brand Oppo launched their own #Don’tTaxHealthy campaign, calling for cuts on VAT for healthier products and launching a petition that attracted a little over 3,000 signatures. Healthy foods lacked affordability, they argued, with price proving a major barrier to purchase, particularly for younger people.

It’s true healthier ingredients are often more expensive for manufacturers, which puts healthier brands and products at a disadvantage when it comes to price, points out Mark Selby, co-founder and CEO at Wahaca.

“Mushrooms, for example, are almost as expensive as steak now,” he says. “That means, as a company, you end up not wanting to push those healthier items because it’s going to hurt your bottom line.”

Were VAT to be dropped on healthier SKUs in supermarkets and menu items in restaurants, though, “I would be heavily incentivised to promote and innovate even more on healthy products, if I knew I could have them discounted without it affecting my bottom line”.

But, if discounts incentivise consumers to eat more healthily, why can the suppliers themselves not stump up the cash needed? That’s the model of Smash, after all, which works with brand partners to offer discounts and promotions to its young users on either its healthier SKUs or its healthiest menu items. In return for a discount “that suits [their] economic model”, brands enjoy exposure to new targeted demographics on the app.

Still, that isn’t necessarily a viable strategy beyond the small scale of Smash. “We’re all in this to make an impact,” says Holmes. “We can do a bit of it, but by no means are we ever going to be universal across the food system so the idea with Smash is almost to establish a body of evidence to go to the government and say, look, when you do promote here’s a load of data that suggests, across various different price points and discounts, the relative elasticity of behaviour change.”

“Any brand constantly offering 20% off a product is going to damage the business in the long term. While we all want to do the right thing, we also want to stay in business.” Which is why brands and campaigners backing the action plan want to see the change to VAT come from government funds, using the likes of Smash as a helpful pilot study of how it might work.

Read more | Global junk food taxes: who tried them and did they work?

For now, the government seems focused on adding rather than removing costs when it comes to discouraging bad eating habits. It’s a tactic that seems to be working, after all.

A study by researchers at the Nuffield Department of Public Health, University of Cambridge, the London School of Hygiene and Tropical Medicine, the University of Bath and the University of Exeter in March found the soft drinks levy had successfully removed 30g of sugar consumption per household per week, thanks to both the flurry of reformulation it fuelled and nudging consumers toward different purchases.

For Paul Brown, founder of plant-based brand Bol, there is a need to balance the stick and the carrot in an “holistic approach”. There is good evidence to show the stick of raising prices can be the most effective route to change, he concedes.

“From a very simplistic view, lowering taxes on healthy products may not be as effective in converting unhealthy purchases. A shopper who buys a basket of unhealthy food each week wouldn’t see their groceries become more expensive relative to their monthly income and therefore the stimulus to consider what they’re buying isn’t as prevalent.”

Increasing taxes and delivering a cost increase, on the other hand, exerts greater pressure and “is a more confrontational way to change consumer behaviour”. Plus, lowering the prices on healthy items may simply reward those following healthy habits already, rather than creating change where it’s most needed. 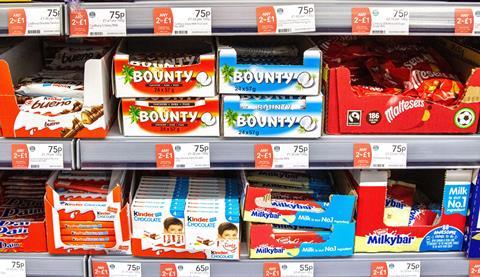 Boris Johnson’s obesity plan set out tactics to push consumers away from HFSS products, including a ban on bulk buy offers and outlawing display promotions at front of store and aisle ends

But, on the other hand, “there are some seriously unhealthy products out there with a favourable VAT rating and many healthy products penalised with 20% VAT. A complete overhaul aimed at tipping the VAT system to support healthy foods would be bold, but is also a fundamental step for the UK government to seriously tackle our obesity epidemic.”

Kawther Hashem, campaign lead and researcher at Action on Sugar, says any removal of VAT would need to complement this existing taxation strategy.

“I can see the huge benefit for companies [of removing VAT] and why you’d get industry support for that,” she says. “We are supportive of changes to VAT or some sort of subsidies,” but crucially, she adds, the campaign group would like to see this paid for by additional taxes on HFSS products, in addition to soft drinks, and only used to provide discounts on unequivocally healthy items such as fruit and vegetables.

It’s the only way the scheme would be practical, she argues. “The debate around what a healthy product is, is very contentious. It’s hard to find even two nutritionists to agree on a definition,” Hashem adds.

It’s true that current nutrient profiling models for food and drink are more often used to highlight what misses the mark on health – ie HFSS products – rather than those outperforming targets.

The model developed by the Food Standards Agency and used by Ofcom to determine what can and can’t be advertised, for instance, balances beneficial ingredients with components that children should eat less of to deliver a score. Fall below a minimum score, and a product is deemed HFSS. Holmes says he’s “a big advocate of a nutrient profile model” being adapted and used as the basis for what is considered healthy too.

Still, it’s an issue that would no doubt provoke hot debate. There are plenty of other questions around the practicalities, too. Not least, how would you ensure companies passed on VAT savings to their customers? “It might not be mandated, but it could very publicly state that’s the sentiment the brands should follow, and use the power of consumer demand and acceptance to shine a light on those that may not do the right thing.”

The proposal may, for now, provoke more questions than answers. But, in rallying major brands and campaigners around his action plan for a major rethink on VAT, Holmes is at least delivering some serious food for thought in the fight against obesity.