Why there’s no need to freak out about freakshakes 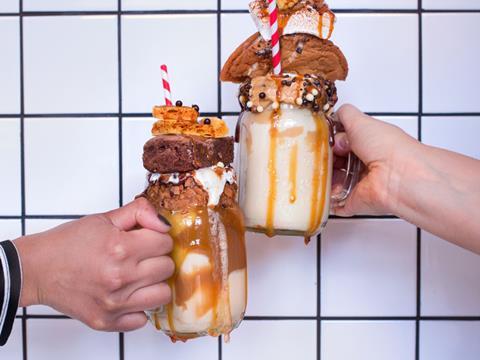 The mega-calorific freakshake drink is causing body-conscious food and health commentators to freak out. It’s easy enough to understand their panic, but harder to truly empathise with concerns about the sugar-stuffed breakout star.

Not surprisingly, health campaigners have clutched their pearls in horror at the Antipodean monstrosity, which made its sickly way from Canberra last year, landing with a splat in Newcastle and then oozing across the rest of the nation into cafés and ice cream parlours.

One food writer for a national newspaper described the freakshake as “revolting… food for the sad”. Me, I say, don’t worry so much about it. Sure, this drink/dessert hybrid looks disgusting – like something the Stay Puft Marshmallow Man from Ghostbusters would pick out of his nose – and is likely to leave its consumer(s) sick to the stomach and jam-packed with self-loathing. But it’s little more than fly-by-night fodder for lovers of Instagram, which, at the time of writing, threw up just over 24,000 results for #freakshake.

It’s not fare to be taken seriously. The name’s one hint; the ingredients are another. The whole purpose of the freakshake seems less like providing sustenance and more like waving a V-sign at clean eating, the paleo diet and all those similar health movements.

The point is: we don’t have to drink/eat the nightmarish thing. We can throw two fingers back at it and walk away. Indeed, we should. As the UK rides a gooey wave of obesity, fretting about the faddish freakshake could distract from the far more solemn, fundamental issues surrounding the foods consumers are putting into their increasingly large bodies.