Will the government dance to Jamie and Hugh’s new anti-obesity tune? 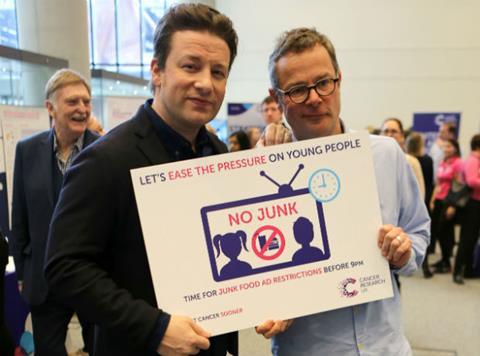 For those still experiencing PTSD from the sight of Jamie Oliver doing his sugar tax victory dance outside the Houses of Parliament two years ago, you might soon want to cover your eyes – and not for the reason he wants.

The health lobby is growing ever more confident the celebrity chef-turned on-off government health adviser may soon return for a repeat performance, possibly shortly after the local elections on 3 May.

Not one to be put off campaigning by a rocky few months for his restaurants, Oliver has launched his latest crusade. This time, rather than sugary soft drinks or turkey twizzlers, it is junk food ads in the firing line.

The chef’s intervention, just like in those previous obesity-focused causes, is doing a good job of whipping up a storm in ways of which traditional health campaigners and politicians could only dream.

Oliver is encouraging social media users to post selfies showing them covering their eyes, on Instagram, Twitter and Facebook, with the hashtag #AdEnough. In doing so he has very effectively declared war on what he calls the “relentless” bombardment of children by advertising for “cheap, easily accessible, unhealthy junk food”.

Such is Oliver’s power, celebrity supporters already include Richard Branson, Amanda Holden and Mark Hamill. With Luke Skywalker on board it’s surely going to be difficult for even the darkest forces in the industry to stop this one.

In fact, the battle could be a lot shorter than the rollercoaster experience Oliver and other campaigners went through in their fight for the sugar tax. He is already said to have met Theresa May and senior ministers to discuss measures that could be brought in as part of a ‘mark two’ obesity plan, which could come as early as the summer.

Whereas the sugar tax was very much the centrepiece of a first episode that was widely panned by industry and lobbyists alike, part two – Theresa May Strikes back – looks set to include sweeping restrictions on ads for HFSS products. These include a potential 9pm watershed, as well as moves to clamp down on junk ads in non-broadcast media, particularly the internet.

The exact timing of the new obesity plan, as well as what else it may entail – action on promotions and multibuys? Restrictions around schools? New regulation for the OOH sector? – remains in doubt. But with PHE due to release the results of the first year of its sugar reduction programme next month – and The Grocer understands this could be something of a horror show for many of the categories involved – the results could easily be the strategy’s launch pad.

The PM is also acutely aware that in Scotland, Nicola Sturgeon is already lining up her own measures on obesity and will not want to be made to look second best.

As for Jamie, far from being a thorn in the PM’s side, his latest campaign is probably more likely to be a welcome intervention for ministers who will look to ride on the back of its popular support in the same way they have tried to do with David Attenborough’s Blue Planet.

In fact, Jamie will not even have to carry them all on his own back, with fellow chef Hugh Fearnley-Whittingstall due to get in on the act next week.

In the first episode of HF-W’s Britain’s Fat Fight, to be screened on BBC1 next Wednesday, intrepid Hugh heads to the Conservative Party Conference to find out what the Tories are going to do to tackle the obesity epidemic.

It might not have the same impact as images of plastic killing beautiful whales, but as far as serving up ammunition for opportunistic politicians, it will be a nice second course to Jamie’s hashtag.

But a message to both: If you do get to celebrate, please, this time, no dancing.