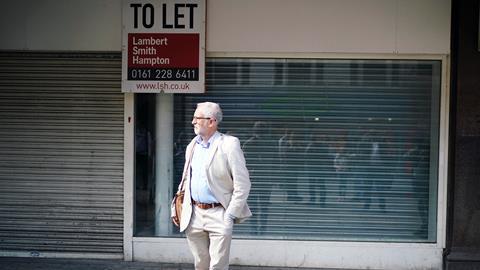 Can Labour’s plan save UK high streets from ‘retail Armageddon’?

Jeremy Corbyn chose Bolton High Street to launch proposals to save the UK from the threat of “retail Armageddon” - and as a barometer of the crisis it was a fitting choice.

To paraphrase Morrissey, for many traders in the town, Armageddon has already come, with the past few months seeing the closure of a string of national stores - including a Costa Coffee, Starbucks and Lush - while a former BHS store remains an empty shell.

The town has also seen a raft of local businesses bring down the shutters, a trend that a new Local Data Company (LDC) report, seized on by the party for its policy launch, says has resulted in up to 29,000 shops having been boarded up for a year or more.

But does Corbyn’s idea, especially a controversial plan to force landlords to hand such properties back to local councils so they can be turned into startup shops and co-ops, pass the credibility test? That particular proposal received a rapturous reception from shopworkers’ union Usdaw.

However, even the authors of the new report fear Labour’s plans don’t stack up.

To begin with, LDC disputes Labour’s press release figure of 29,000, claiming the correct figure of units empty for more than a year is 24,000.

Either way it is still a sobering figure, with LDC telling The Grocer 7.4% of all units had been boarded up for more than a year in the first half of 2019.

LDC says the figure had grown as high as one in 10 in 2016, but made a temporary recovery due to a growth in demand from leisure brands, vaping stores and health & beauty salons, which it says has now ground to a halt.

As for the practicality of Labour’s solutions, LDC has severe doubts. “I think in principle it’s a good idea,” says report author and senior analyst Ronald Nyakairu. “It’s one way to fix the issue of these ghost towns. But one of the questions is how long they will last and whether there is the demand.

“The really big question on top of that is ‘who is going to foot the bill?’”

Nyakairu says the disastrous experience of the Portas Pilots, launched under the former high street tsar Mary Portas in 2012, showed how throwing money at high streets to bring in pop-ups and startups would not work unless market forces could support longer-term rejuvenation.

“In the same way look at the empty BHS stores. Some of those units have been used on a short-term basis but are businesses able to keep them going in the long term? Sadly that’s proved not to be the case so far.”

Indeed, this week The Grocer reveals a series of startups launched across the UK as part of a scheme by Amazon have so far been struggling to last, such is the extent of the exodus to online shopping.

With that brutal backdrop, a series of town centre experts tell The Grocer they have major doubts about the capability of local authorities to take on Labour’s ambitious proposals.

“I love the idea that Jeremy Corbyn wants to re-open shops that have closed down,” says Matthew Ogg, policy advisor at Revo. “But I don’t know anyone in the industry who doesn’t want that. The sad fact is it’s not just about getting new tenants in or a new startup. It’s all about the structural issues that are affecting these businesses.”

Ojay McDonald, CEO of the Association of Town & City Management (ATCM), adds: “The main problem with the proposals is how are we going to pay for it, where is the money going to come from?

“Local authorities have already been pushed to the brink financially so how can they be expected to oversee turning nearly 30,000 units back in to startups and co-ops?”

McDonald believes some landlords are contributing to a rise in the number of the UK’s ghost towns, saying landlords holding on to property and not engaging with local redevelopment proposals is still “a big issue”.

However, others claim Corbyn is wrong to blame landlords for the crisis, especially as legislation introduced by the Labour government in 2008 has already hit landlords in the pocket, with so-called “empty rates” bills for properties left empty for three months or more.

“When I read his proposals I just laughed,” says Dan Simms, co-head of retail agency at Colliers International. “Labour has just picked on one symptom of the overall malaise on the high streets when in reality the situation couldn’t be further from the truth.

“The vast majority of retail property is owned for investment purposes and ultimately landlords are trying to produce an income.

“There is no mention of trying to balance the tax burden between bricks and mortar and the internet, no mention of the fact we have a predatory company in Amazon domiciled in Luxembourg waiting in the wings for the high street to fail.”

Robert Hayton, head of UK business rates at Altus Group, says the empty rates legislation has fuelled the rise of “rates only” leases, which has left property landlords facing a “calculated gamble”.

“Is it more financially ‘palatable’ to keep a tenant in place paying no rent to save a greater outlay on what can be a substantial business rates bill?”

One example saw landlords of about 28 House of Fraser stores offered ‘rates only’ deals in a bid to keep stores open. This would have seen landlords not receive rent - but have their business rates met.

“Nobody likes to see empty and boarded-up shops and we strongly support initiatives - such as business rates reform - to help turn around struggling town centres,” adds Ian Fletcher, director of finance & commercial policy at the British Property Federation.

“Many landlords are happy to let out property on a meanwhile basis with little or no rent, but the sad fact is that in many places property owners find it difficult to find an occupier even at zero rent.

“Giving local authorities the power to reopen those shops simply shifts the challenge from the private to the public sector and raises worrying questions about what rights property owners would have in such cases.”

Emma Jones, founder of the charity Enterprise Nation, who has spent years trying to revitalise the high street, including overseeing the new raft of pop-ups launched by Amazon, says Labour’s plan does not focus enough on the huge shift to internet shopping.

“While we welcome the sentiment, we think the Labour Party should consider very carefully the high street and its relationship with online retailers.

“While technology is enabling more and more people to operate a successful online retail business model, the challenge of how to help them make the move into high street retailing needs more thought.”

There has been plenty of thought put in to how to save the high street in the past decade, as well as plenty of cash. Sadly, nobody has yet come up with a convincing answer and Corbyn’s latest proposals look like they are in danger of going the same way.