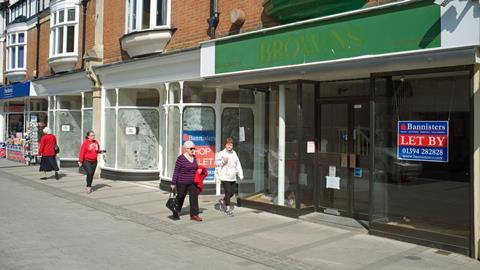 With the end of government’s bans on non-rent payment evictions and winding-up orders imminent, what now for retailers and landlords?

A cliff edge is looming for retail at the end of this month, when the government’s three-month ban on eviction for non-rent payment is due to expire. Landlords are “itching to pull the trigger and take possession”, Matt Pugh, managing partner at property litigation firm Hägen Wolf told The Grocer this week.

A ban on winding-up orders and statutory demands over rent debt is also set to expire on 30 June, meaning retailers could be forced out of business.

For months the British Property Federation and BRC have been calling for the government to pay rent in a ‘furloughed space grant scheme’ but none has been forthcoming.

Last week, some cause for optimism arrived in the government’s announcement it was working on a ‘code of practice’ for retailers and landlords in finding solutions. It was being developed with industry bodies on either side of the talks and would give “clarity and reassurance to both”, said communities secretary Robert Jenrick.

The code would encourage “fair and transparent discussions” over rental payments, according to the Ministry of Housing, Communities & Local Government’s announcement. It would be temporary but - somewhat confusingly, if its aim is simply to encourage negotiation - the government would also explore mandating it.

And if you were hoping for more clarity, you would have been disappointed. So, what do those industry bodies involved expect from it?

The BRC, UKHospitality and BPF all welcomed the announcement, but it perhaps got its most enthusiastic reception from the latter. This could be because, in the announcement itself, tenants were reminded the protections in place were not intended to provide a “rental holiday” - which landlords have complained some well-capitalised retailers are taking advantage of.

According to BPF CEO Melanie Leech, at a roundtable following the announcement of the winding-up and statutory demand ban in April, ministers acknowledged the measure had been imbalanced in favour of tenants. “But they wanted to take action to try to support landlords, recognising that no one party in the chain of funding could take all the pain and there had to be solutions that shared the pain equally.”

Leech wants a voluntary code, encouraging negotiations only. While she stresses many tenants have continued to talk constructively with landlords, a minority have not, she says. “The code has to speak to all parties but in particular tenants, the retailers who are protected but are not necessarily engaging in conversations with their landlords and storing up that cliff-edge problem.”

The BPF also wants the protections for tenants removed at the earliest possible date. “Ministers made it really clear to us that they saw the moratoriums as exceptional short-term measures to deal with a crisis situation and give tenants some breathing space,” says Leech. “We will be expecting them to stick to that.”

But in the interest of both parties, tenants who simply don’t have the money also need to be saved from hurtling off that cliff edge. So, the BPF also continues to call for a government grant scheme, access to which is contingent on compliance with the code. That way, compliance would be encouraged and where no constructive outcome to negotiation could be found, the grant scheme would provide one. “The tenant has to pay a bit of the rent, the landlord has to accept it’s not going to get all of the rent, and the government will put in a little bit of money to bridge the gap,” says Leech.

Perhaps unsurprisingly, there is some misalignment of these expectations with tenants’.

Both the BRC and UKHospitality have welcomed the code with caution. “Hospitality businesses have seen revenues all but dry up since March, so government intervention is desperately needed - with a sustainable financial plan in place,” said UKHospitality CEO Katie Nicholls as the code was announced last week.

BRC property policy adviser Dominic Curran says the body is “working constructively with the government and landlords to agree a code that will set out expectations”.

But he adds a note of caution: “If a voluntary code doesn’t work, however, government will need to explore other options, such as supporting rents through the furloughed space grant scheme and linking this to a code which is binding on all parties.”

Sources in the tenant camp, familiar with the draft code, are privately more pessimistic. The attitude is a voluntary code already exists. “It’s called talking to landlords.”

It is claimed the reality is those landlords and tenants who have been in a position to have constructive talks have done so. Those that have not are unlikely to be brought to an agreement by “exhortations from Robert Jenrick”.

From this perspective, the voluntary code is destined to fail and there are three possible outcomes. One is that the protections are extended for another quarter at least, and the code changes in nature and becomes mandated. It would now dictate the outcome of talks rather than the process. Yet both camps see this as extreme intervention. “Given that tenants don’t have any money it would be mandating that landlords don’t get as much, which would be a big steer from government,” says a tenant source.

The BPF balks at the notion. “It would be tearing up a contract that has been entered into in good faith between two parties, and replacing it with an arbitrary government view,” says Leech.

The second outcome from the tenant camp perspective is that the protections are extended and the grant scheme is launched, saving those tenants - and landlords - for whom the money is not there.

The third option is that the voluntary code fails and businesses that don’t have the money are allowed to go over the cliff, leading to “mass redundancies and administrations from retailers and hospitality businesses”.

“I know of otherwise very sustainable businesses that were looking to invest and expand and had no leverage problems - who will go bust or enter into a CVA this summer unless action is taken on rent,” says a source. “That could be an outcome, if government is prepared to accept that.”

There is at least one point, then, on which both sides of the fence agree: the need for a grant scheme. It is the same point on which they have agreed since 17 April, when the BRC, BPF and shopping centre industry body Revo called for it in a joint letter to Chancellor Rishi Sunak.

With the cliff edge approaching, time is running short for the government to see it too.

How the grant scheme could work

Around £1.4bn of retail’s quarterly £2.5bn rent bill was unpaid at the end of March, according to the British Property Federation. After months of zero turnover for many businesses, their capacity to pay at the end of June is unlikely to have improved. This is the government bailout package proposed by the BPF, BRC and Revo in April, with grants awarded on a sliding scale according to a retailer’s loss of turnover.