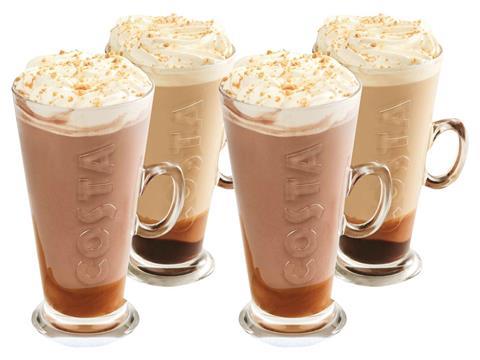 Costa Coffee has hit back at claims that the sector is falling short on sugar reduction, saying it is on track to exceed PHE’s targets.

James Pitcher, head of sustainability at parent company Whitbread told The Grocer that Costa was set to slash sugar levels across the coffee chain’s drinks range by 25% by 2020. It had already cut levels by 16% since 2014, he added. This target surpasses PHE’s target of a 20% reduction by 2020.

Costa has also undergone a menu reformulation. Measures include cutting sugar in its teacakes and chocolate tiffin by 12.6% per portion and 7.8% per portion respectively.

This comes after Costa signed a OOH sugar reduction code of practice in January along with the likes of Greggs, Caffè Nero and McDonald’s. The agreement pledged to cut sugar levels in line with PHE targets.

“Brands are taking this really seriously and are taking action perhaps in a way that wasn’t the case a few years ago, and I think that work needs to be recognised,” said Pitcher. “We have come a long way in quite a short space of time. And the OOH industry alliance just shows that actually as an industry we’re willing to collaborate to find a better outcome.

“We’re actually working on some new targets. We set the current targets that we’re working to a while ago now, and the landscape has changed significantly since then.”

He added that while Whitbread was keen to align itself with organisations looking to cut sugar levels, it would not pursue targets at the expense of food quality.

Last month, PHE published the initial findings of its voluntary sugar reduction programme. Data revealed that sugar levels in the OOH sector were more than twice as high than for other manufacturers and suppliers.

Campaign groups including Action on Sugar and the National Obesity Forum subsequently slammed the sector for its high sugar levels and called for a clampdown on the OOH sector.

Health groups have previously called for the introduction of other measures too. The National Obesity Forum told The Grocer in April that it felt the government should extend the soft drinks sugar levy to include sugary coffees and milk-based drinks.

However, Pitcher dismissed this move as too hasty within the first year of PHE’s sugar reduction programme and said that critics should allow time for coffee chains’ voluntary measures to take effect.

“Given it’s only the first year of Public Health England’s sugar reduction programme for foods and they’ve only just announced their sugar reduction targets for milk-based drinks, we believe it’s premature for this to be considered.

“Costa has demonstrated our commitment to sugar reduction without any need for fiscal measures and we have done that by proactively engaging with Public Health England and campaign groups like Action on Sugar to show how we’ve been reducing sugar by reformulation, replacing products with healthier alternatives and introducing healthier options.”