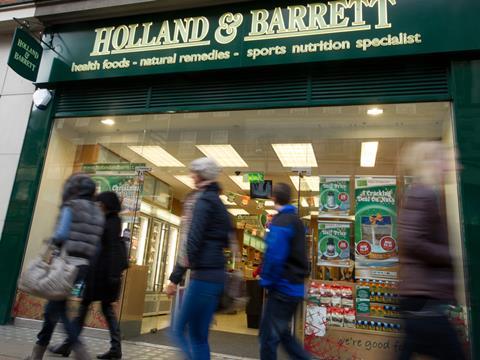 Groceries Code Adjudicator Christine Tacon has written to Holland & Barrett warning it risks “tarnishing” the Code after questioning a claim by its boss that the company works within her rules.

In an interview with BBC Radio 4, Holland & Barrett CEO Peter Aldis claimed the idea of strained relations with its suppliers was “old hat”.

He said the high street health products retailer “did not have a problem” with suppliers, despite claims it gets away with behaviour that would be banned among those signed up to the Code.

“Most of the Groceries Code, we behave within that,” Aldis said, sparking a furious response from Tacon.

It comes two years after Holland & Barrett controversially sent a letter to suppliers demanding they contributed millions of pounds towards its store investment plan.

The company sent a letter to suppliers in January 2016 saying it wanted a reduction of costs of at least 5% from suppliers, also demanding they paid towards the cost of security tags and CCTV.

Aldis said: “What has never been portrayed in all of this is that we were facing rising costs from our suppliers yet we were investing in the business, which grew by 15% that year.”

Speaking to The Grocer, Tacon said: “He said they worked inside the Code , so I’ve written to him and said ‘would you like to meet me and I’ll explain the code to you’.

“Certainly some of the things they were talking about on the radio programme didn’t sound Code complaint to me and I also don’t want the Code tarnished.

“The Code is a brand. Retailers that are complying with the Code are having to do a hell of a lot of work to be Code complaint and it’s giving suppliers confidence to talk to them.

“I will not have that brand tarnished by other people saying they are adhering to it when they are not or they don’t know about it.

“If they [Holland & Barrett] want to voluntarily submit themselves to be covered by the Code then I’m very happy to voluntarily work with them. We can’t have people bandying around saying ‘we’re Code compliant’.”

The row comes with the CMA due in August to extend the range of retailers covered by Adjudicator Tacon.

She told The Grocer: “My ambition is get me the right retailers. Give me the retailers that need to be regulated because they are taking advantage of suppliers and I will grasp that with both hands.”