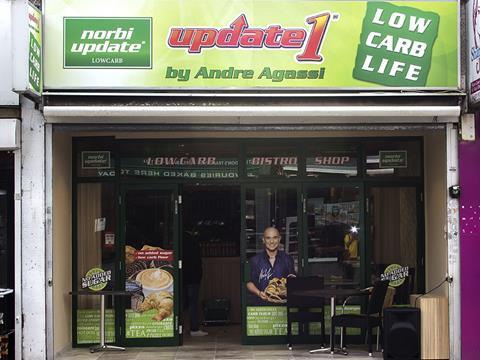 The shop also sells more than 300 low GI, no added sugar Update 1 products including pastries, flour, pasta, cakes and biscuits in which the carbohydrate content has been reduced by at last 50%.

Special Norbi flour made from ingredients such as pea protein is used to make most of the bakery items, which are said to contain 70% less carbohydrate.

Roman Bhatia, Update 1, chief executive of franchising in the UK, claimed the East End location was chosen due to its “diverse, bustling and growing community”.

“We felt our low-carb health brand could provide a real point of difference and offered something unique.” Further stores are expected to open in Farringdon, Angel and Muswell Hill over coming months; by the end of 2019 the firm intends to have more than 50 UK-wide franchises, as well as an online and home delivery service. Eight times Grand Slam winner Andre Agassi recently signed as Update 1’s brand ambassador. “I have long believed that exercise, plus the right nutrition and diet, are essential to long-term mental and physical health,” he said. “The obesity problem around the world is extremely worrying so I am delighted and excited to be working with Update 1 to help people make the small changes that can make a big difference.”