Aldi responds to wave of job enquiries with careers chatbot 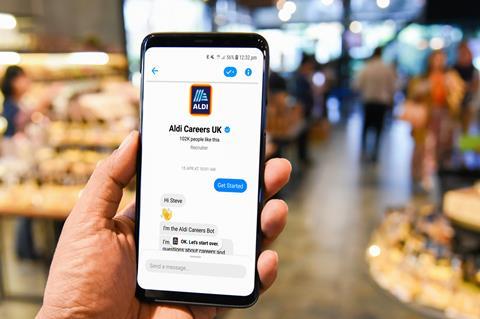 Aldi has dealt with thousands of job enquiries using a new careers chatbot.

The ‘careers bot’ answers questions from job hopefuls on Facebook Messenger and directs them to relevant opportunities.

It was launched to deal with high levels of interest in January this year, when Aldi also gained widespread media coverage for its competitive pay rates.

The bot has so far sent more than 43,000 messages in response to questions from over 1,500 potential applicants, with 6am-7am the busiest time, the supermarket told The Grocer this week.

From the end of January, Aldi raised store assistants’ minimum hourly wages to £10.55 within the M25 and £9.10 elsewhere in the country, up from £10.20 and £8.85 respectively. The retailer also gained exposure for its ‘Career Changers’ area manager recruitment programme.

Expansion saw more than 5,000 staff members recruited in 2018, while about 600 enquiries a month are received through social media, according to the discounter.

The bot is designed to show people vacancies based on their preferred role and location, and help them learn more about opportunities.

“The messenger bot has been a fantastic addition to the Aldi Careers Facebook page,” said Kelly Stokes, the retailer’s recruitment director. “It’s enabled us to respond in real time to queries, offering followers instant information 24 hours a day.

“We’ve been very impressed with how Facebook users have engaged with the new tool and are thrilled to be able to offer this extra level of service to our potential new colleagues.”

After asking some questions, it takes users to the relevant section of Aldi’s recruitment website.

“It is also able to hand over the conversation to the human team where needed,” said an Aldi spokesman.

A fifth of the bot users to visit Aldi’s recruitment site went on to start an application, a higher rate than delivered by online job boards, the spokesman added.