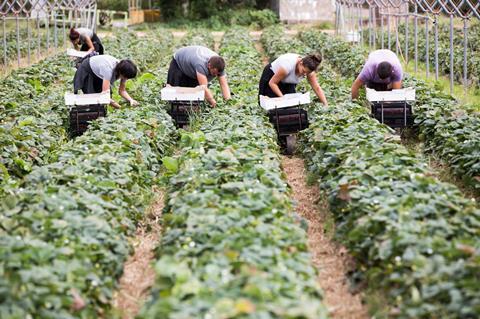 The government has scrapped the Pick for Britain campaign aimed at recruiting UK-based workers for seasonal farm roles, the Grocer understands.

Launched last year when Covid-19 left many foreign workers unable to reach the UK in time for the beginning of the harvest season, the campaign consisted of advertising and a website hosted by AHDB which directed UK workers to roles.

While it attracted big interest – with tens of thousands of Brits applying for thousands of roles during the first national lockdown – and received major backing from Waitrose, relatively small numbers of recruits made it onto farms.

Estimates suggested Brits made up between 5% to 11% of the 70,000 picking and packing roles required across the 2020 season.

While Defra has not directly commented on the reasons behind the move, it is believed the government has opted to work towards removing barriers to recruitment rather than running a national campaign.

The Grocer understands this will involve the Department for Work & Pensions, which runs Job Centres.

It marks a U-turn from the government’s previous position. Defra had said it planned to work with the industry to build on last year’s campaign when it expanded the Seasonal Agricultural Workers pilot to 30,000 permits in December.

According to the British Growers Association, the news was not unexpected due to the SAWS boost and fewer Covid-related travel restrictions. But the industry body said there was “a real concern” over whether the UK would have the staff it needed come the peak of the season.

“I think June/July will be the test period when you’ve got the salads, soft fruit and brassica industries all flat out. They’ll need a total of 40,000 to 45,000 workers for that peak period,” said BGA CEO Jack Ward.

“In addition to the 30,000 [SAWS permits] there are those with settled and pre-settled status. But you’ve got the complication of whether people will turn up [due to Covid-19 in Europe]. There’s no room for complacency and I suspect it’ll be another challenging and difficult season.”

Asked whether the recent vote to scrap the AHDB horticulture levy had any bearing on Pick for Britain’s fate, a senior industry source thought it unlikely.

“It might be budgets versus necessity, or a combination of both. I’d imagine it’s less to do with funding because [the campaign] wasn’t expensive. It’s probably because circumstances are different now.”

The termination of the scheme came as a surprise to a number of farming experts.

Speaking to The Grocer before the news, NFU’s Ali Capper said she hoped the Pick for Britain website would allow government to “trace the data” and see how “difficult” it was “to recruit these roles domestically”.

The news comes amid major uncertainty for growers ahead of the harvest season due to a lack of a government announcement on the two additional labour providers for the SAWS scheme.

There were also concerns that workers were facing barriers getting to the UK due to confusion among EU and UK border agencies.

In response, the Association of Labour Providers launched a new ‘Extra Workers Needed Portal’ for the food supply chain in January in a bid to address critical worker shortages.